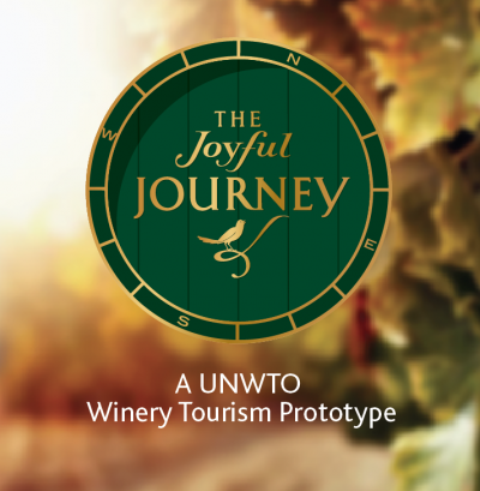 Named ‘The Joyful Journey’, the prototype is based on the World Tourism Organization’s methodology, which fosters public-private collaboration in the development of tourism products.

This prototype is characterized by its international scope, this is the first ever it’s applied to the winery tourism in Spain and this move opens the possibility to implement it in other countries.

This project comprises five Spanish wineries, which are also members of the Forum of Renowned Spanish Brands.

The World Tourism Organization (UNWTO) and the Forum of Renowned Spanish Brands (FMRE is the Spanish acronym) have unveiled a winery tourism prototype to be internationally positioned under “The Joyful Journey” brand. The initiative counts on the participation of such wineries as Barbadillo, González Byass, Grupo Freixenet, Osborne and Pagos del Rey, as well as the support of the Tourism State Department of Spain.

The launch of ‘The Joyful Journey’, UNWTO’s first winery tourism prototype, was held within the framework of the 103rd edition of the UNWTO Executive Council, presently taking place in Malaga. The meeting is being attended by representatives from 50 member-countries of the UNWTO, as well as public and private institutions of the travel industry. The global scope of the prototype opens doors for its application in different contexts, so the presentation at the UNWTO Council represents an opportunity to ‘export’ the model to several countries. The UNWTO’s prototypes, developed by its Affiliate Members program, are based on the public-private collaboration to create innovative tourism products and experiences.

“The Joyful Journey” aims at turning every winery into a tourism interpretation centers in the area, thus providing a new and authentic perspective of the main resources they have. So, the point of view used to value a traditional tourism resource is completely different from the one shown in common visits.

In Spain, the resulting experiences will try to connect travelers with such elements as the influence of the families that own wineries in Marco de Jerez, natural environments like rivers and the Pyrenees in Somontano, the cross-border history of Castilla with the castles of Ribera del Duero and Toledo or the sea and territory between Galicia and Toro. The relation among these components sheds authenticity on the traveler’s experience, since they can tour across the country and be in touch with the local lifestyle by means of the wineries that stand out as flagship in the area or region were they are based.

The development of the prototype represents a successful example of the public-private collaboration defined by the coordination of five leading companies in the sector with the public administration and international organisms in a bid to foster winery tourism. The UNWTO team and member-wineries of the Forum of Brands are working in the areas or regions where the participating wineries are based. These areas are Galicia, La Rioja, Marco de Jerez, Penedés, Priorat, Ribera del Duero, Somontano, Toledo and Toro.

The outcomes of this project are going to be announced during the first World Winery tourism Conference, organized by the UNWTO and the Government of Georgia, to be carried out on September 7-9 in that country.

Objective: Increasing the demand of winery tourism in Spain

Only 2 percent out of the 68 million international tourists that visit Spain every year include enotourism-related activities in their trip, which speaks of the huge range of opportunities in this segment in Spain, a country that produces over 40 million hectoliters and is ranked as the first vineyard of the world in terms of surface.

The prototype, developed by the UNWTO in collaboration with the Forum of Brands, includes the assessment and diagnosis of the present situation of Winery tourism, compared to other markets, as well as the technical design of the tourism model, by tackling such aspects as the composition of the offer structure, brand identity and the development of business and product.

The project is presently going through the third stage, which includes the creation of a governance model, as well as the strategic development, exploitation, marketing and advertisement of the tourism model and its products. As part of the third phase, a business plan is being prepared to activate the model in stages 4 and 5.