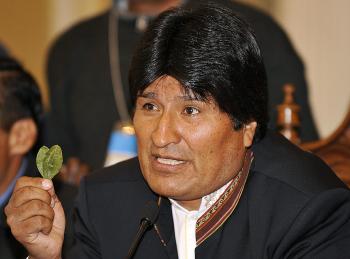 Bolivian President Evo Morales announced today the main issues that his government will bring to the Second Summit of the Community of Latin American and Caribbean States, set for Tuesday and Wednesday in Cuba.

In a press conference before leaving for Havana, Morales said that the meeting will include as special communiqués the nutritional properties of the coca leaf, the right to water and the actions to be carried out after the International Year of Quinoa.

"Bolivia managed to include as special communiqués in this Summit the research on medicinal and nutritional properties of the coca leaf, the human right to water and how to continue the actions after the International Year of Quinua developed in 2013," he said.

Morales also referred to his government’s great interest in finding joint opportunities with Chile to overcome still outstanding problems between the two countries.

"We want to improve the good people-to-people relations, and our great interest is to work with the government for our peoples," he said.