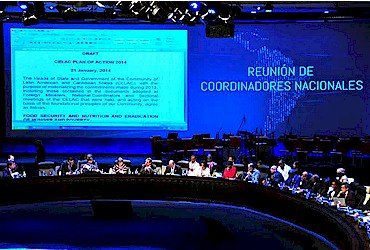 The Community of Latin American and Caribbean States (CELAC) approved a document in Havana, Cuba, that declared the region a peace zone. The announcement was made at a press conference by Abelardo Moreno, Cuba’s deputy foreign minister, on Saturday evening ahead of CELAC’s second summit in Cuba.

Under this classification, Moreno affirmed that the region will be governed by international law and is committed to eliminating the use of force as a means of settling disputes. Furthermore, Moreno stated that member countries of CELAC must respect the sovereignty, autonomy, and non-intervention principles involved in nations’ internal affairs. He added that promoting cooperative relationships among themselves and other states is of utmost importance.

The document will be presented in Havana today, and requires the approval from foreign ministers of attending nations before the Heads of State can endorse it, which is scheduled to take place tomorrow and Wednesday.