Cuba’s Hotel Challenges: A Guide to All the Projects in Process 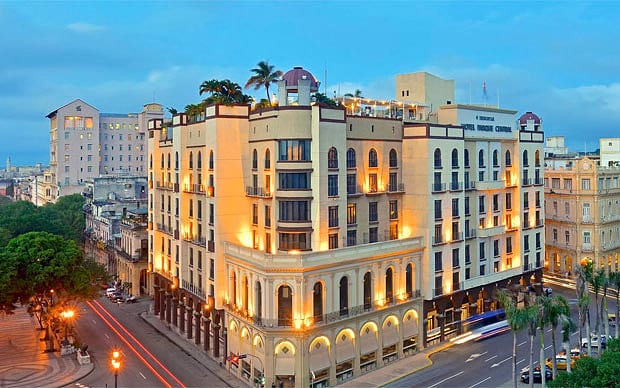 The surge in visitors to Cuba, brought on by the December 2014 detente between the island and the U.S., caught the Caribbean nation unawares.

Hotels are overwhelmed and Cuba can’t build new hotels fast enough to cope with the boom in visitors from the US and around the world. Last year 3,524,779 people visited Cuba, a 17 percent increase on the year before.

Over recent years Cuba has slowly been building mostly beach resorts for Canadian and European tourists with a few pockets of urban hotel activity in cities such as Santiago de Cuba (the much-needed city center Hotel E Imperial has just opened) distant Baracoa and in central Camagüey, a city not on the principal tourist circuit. In Viñales, where the accommodation situation is acute, one new small hotel is under construction opposite the church plaza to complement the existing offering of just three state-run hotels in the valley.

In 2014, the Cuban government passed the Foreign Investment Law (FIL) offering foreign companies a number of opportunities to build and commercialize hotel developments in joint ventures with a Cuban partner, construct golf courses in partnership with a Cuban company, sign hotel administration contracts with Cuban hotel companies, and develop or build new marinas in conjunction with a Cuban state partner.

None of the 56 tourism projects showcased in the 2014 law allow a 100 percent foreign investment.

Richard E. Feinberg, nonresident senior fellow in the Latin America Initiative at the Brookings Institution, and author of the newly published book Open for Business: Building the New Cuban Economy spoke to Skift about the rigid rules:

“As socialist states open to the international economy, it is common that initially they require foreign investors to partner with powerful state-owned enterprises protecting their turf. Over time, as market mechanisms take hold and governments become more comfortable with foreign firms, then 100 percent foreign ownership is added to the hybrid mix of investor relations and property ownership – but Cuba is not there yet.”

At the same time as the new FIL was passed, the Cuban government set up CubaGolf, a subsidiary of state enterprise Palmares, to manage the new business of joint ventures with foreign companies on building golf courses with complexes of hotels, and condominiums and villas which would be sold to foreigners. When ready for sale, these will be the first accommodations available for foreigners to buy since the 1959 Revolution — apart from a small window, since shuttered, in the 1990s. (Foreigners who hold Cuban permanent residency are entitled to buy.)

Below, Skift takes a look at where these proposed developments are — in terms of progress — and the raft of new projects in the pipeline.

UK property magnates London + Regional signed a joint venture agreement with Cuba’s Palmares in February 2014 having acquired the UK’s Esencia’s 49 percent interest in the Carbonera hotel/golf/villas project, some 115 km east from Havana, and 30 km west from Varadero. Esencia, itself, drafted a plan in 2008 promising to break ground in 2009.

Desmond Taljaard, Managing Director for Hotels for L+R, plans to be the first to break ground on the Carbonera Resort, which has development costs of more than $500 million. The Carbonera Resort will see a 150-room hotel, IDG-designed 18-hole golf course, and 1,000 villas and apartments sold on a perpetual lease (virtual freehold).

Mr. Taljaard told Skift: “We aim to break ground at the end of 2016 with marketing to begin in 2017, and the first phase completed by 2020. This first phase will include 200 residences, the hotel and the beach lagoon.”

The second company due off the starting block is Canada’s 360 VOX which has partnered with large Cuban state hotel company Gran Caribe to build a $1.2bn development on 12.5sq kms of land stretching from El Fraile up to the borders of Memories Jibacoa, some 60 kilometers east of Havana. The Village at Jibacoa is slated to have a 27-hole course, and four hotels, villas, and apartments offering 3,474 accommodation units, and leisure facilities. Its spokesman told Skift it was waiting for a local authority approval and plans to break ground in fall 2017.

In June this year, Cuba’s Ministry of Tourism said it was close to a deal with a Spanish consortium La Playa Golf/Resorts S.L to build the vast Punta Colorada Cuba Golf Marina in remote Punta Colorada in Pinar del Río province, and close to a golf development deal with a Spanish firm, west of Havana at El Salado. Spain’s Urbas Grupo Financiero announced in March it had begun to line up finance for a resort of 1,500 villas and 3,000 apartments with several golf courses at Rancho Luna-Pasacaballos, near Cienfuegos, with a US$580 million investment budget.

A further $570 million investment opportunity, in partnership with CubaGolf, is offered at Chorrera-Ancón near Trinidad for two 18-hole golf courses, a hotel and 2,850 villas and apartments for sale on a perpetual lease.

Other projects, drawn up in the first round of golf development news about five years ago, appear to have been hit into the bushes. These include coastal golf projects at Santa Lucía, Las Tunas, Colony (Isle of Youth), Bacunayagua, and Guanahacabibes; La Altura in association with starchitects Foster + Partners in western Cuba has been confirmed as on hold, its London office told Skift; and Standing Feather International’s plan for the Holguín coast appears to have been abandoned.

The 2014 FIL detailed a golf development opportunity at Loma Linda, Holguín, but this did not appear in the amended 2015 FIL document suggesting that a potential deal may be under discussion.

Professor Feinberg explained: “The Cuban government’s official explanation for why some potential projects were dropped from the amended FIL documents is that in those instances the government is already in advanced conversations with potential investors.”

On the new hotel front, numerous developments are afoot. Gaviota, the largest tourism operator in Cuba, and the tourism wing of the Cuban military, released a video last year showcasing its ambitious plans.

A number of international hotel companies have signed management agreements with Cuban counterparts and Skift takes a look at some of the biggest players in the hospitality field. (In 2014, the FIL offered 33 hotel management and commercialization contracts to foreign investors; this had jumped to 59 opportunities in the amended 2015 FIL document.)

In Havana, Starwood became the first U.S. hospitality company to operate in Cuba after a 60-year hiatus. Starwood signed a management contract with Gaviota to run Four Points Havana by Sheraton (the former Hotel Quinta Avenida). It opened its doors to the public in June 2016. Starwood aims to open the Hotel Inglaterra under the Luxury Collection brand on November 1 having pushed back the opening from August 31. Starwood has also signed a letter of intent to run the historic Hotel Santa Isabel on Plaza de Armas under the same luxury brand.

The centrally located Hotel Manzana de Gómez, opposite the Inglaterra, was due to open this year. The Swiss hotel group Kempinski, touted in Cuban and foreign press as the managing foreign partner, confirmed to Skift it has not signed a management agreement with Gaviota for the luxury hotel.

French company Accor has partnered with Gaviota on Sofitel So La Habana currently under construction on the prominent corner plot of Prado and Malecón. Accor also confirmed its plans for a stylish 112-room MGallery in Havana and a 202-room Ibis.

Opposite the future So La Habana, the 300-room Hotel Packard is being resurrected by Gaviota using French architects. Spain’s Iberostar (a current significant player in the hospitality market in Cuba) would not be drawn on whether it has signed a management agreement on the prime oceanfront property. However, prominent Spanish architect Rafael Moneo, who did work with Iberostar on a proposal for the Packard, is no longer associated with it he confirmed and said the project has passed on from Iberostar.

Outside of the capital, Singapore’s Banyan Tree Resorts has partnered with Gaviota for the Dhawa Cayo Santa María (opening delayed from July 2016 to later this year), the Angsana Cayo Santa María, Banyan Tree Cayo Buba and Angsana Cayo Buba (Cayo Buba is off Varadero). Thailand’s Centara Hotels & Resorts will open Centara Grand Beach Resort Cayo Guillermo in late 2017, the first resort in Cuba to feature over water villas. Centara confirmed it has two other Cuba properties in the pipeline. Iberostar confirmed its 11th hotel opening with the Iberostar Playa Pilar on the formerly virgin beach of the same name on Cayo Guillermo. Its 12th opening will be Iberostar Bella Vista in Varadero at the end of this year.

Spanish hotel company Meliã, the largest hotel operator in Cuba, confirms it will open the all-inclusive Meliã Internacional on the site of the demolished mid-century Hotel Internacional in Varadero in 2018 in conjunction with Gran Caribe. A 400-room Meliã Trinidad is in the pipeline in partnership with state operator Cubanacán. Plenty of other development is scheduled for the Trinidad Ancón Caribbean beach area with further golf plans, hotels and an aquatic park slated. An 802-room Paradisus Cayo Santa María, Meliã’s luxury brand, is scheduled to open in 2018 on the keys north of Santa Clara in partnership with Gaviota.

French company Pansea Hotels and Resorts does not yet have an opening date for the luxury Pansea Trinidad, incorporated into the La Popa church above Trinidad town. Its plans for a hotel next to the Partagás cigar factory in Havana, and in the Viñales Valley remain in the pipeline, its spokesman said.

And, it’s not just large players that are taking advantage of Cuba’s extraordinary tourism boom and new private enterprise laws.

Locals and foreigners are starting to up the aesthetic stakes with reworked old properties given design and architectural makeovers. Malecón 663 will be a boutique casa-hotel right on the Malecón in Havana with a café and concept store integrated into the colonial building. It’s due to open in December this year. Mansión Alameda, redesigned by British-Cuban team Jonathan and Kendra Ashton is due to open in Trinidad by spring 2017.

Caribbean Tours Ltd (formerly Cuba Real Tours) partnered with well-known Cuban architect José Antonio Choy on stylish mezzanine rooms in Loft Habana last year. The same team is working on a boutique casa in the El Trianon building in Vista Alegre, Santiago de Cuba. Caribbean Tours Ltd confirmed it is working on further private boutique casa-hotels in Cienfuegos, Viñales and Camagüey and plans to open eight to 10 boutique options in the next five years all with a minimum of 10 rooms.

And Cuban chemical engineer-turned-designer Ydalgo Martínez, and now a new breed of Cuban hotelier, dare we say it? plans to open his third stylish apartment for rent in Havana in December – the penthouse Marina 61 facing the Malecón.