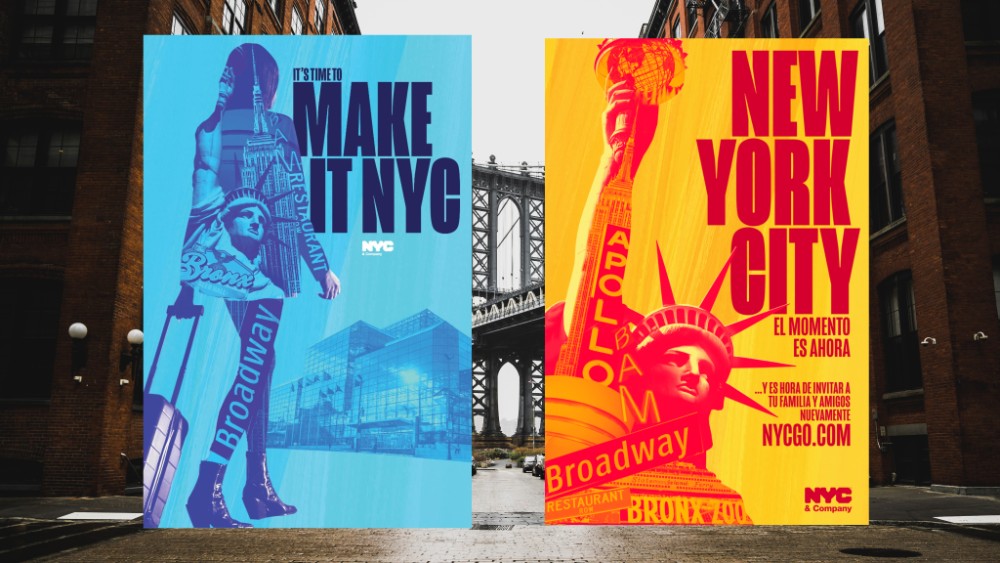 The unprecedented $30 million tourism recovery campaign is being rolled out as restrictions are lifted, more people are vaccinated and as travel resumes in the United States and beyond. The new investment is made possible through American Rescue Plan Act funds secured and awarded by U.S. Senate Majority Leader Charles Schumer and Mayor Bill de Blasio.

“It’s Time for New York City” will run in three phases and will include television, digital, outdoor media and partnerships. The initiative reminds visitors of the City’s unrivaled energy, excitement, and the abundance of life, endless experiences and resiliency that make NYC the most iconic destination in the world.

Designed to create urgency and FOMO (Fear of Missing Out), “It’s Time for New York City” will be unveiled today during NYC & Company’s Board of Directors Meeting at the Javits Center. The announcement comes as New York City expects to welcome 36.1 million visitors this year—recapturing more than half of its record 66.6 million visitors in 2019.

“It’s Time for New York City” will first target travelers in 23 markets across the United States, followed by Mexico, Canada and Latin America, with plans to expand farther internationally as other key markets reopen for leisure and business travel. The multi-phased campaign will launch with a cooperative marketing and advertising partnership with AAA Northeast to boost regional travel this summer.

Consumers can browse an official resource to Enjoy the Best of Summertime in NYC, including unique guides to each of the five boroughs. The collaboration will also include special offers and the opportunity to experience personalized NYC packages for 8 million AAA members in Connecticut, Massachusetts, New Hampshire, New Jersey, New York, Pennsylvania, Rhode Island and Washington, DC as well as travel agent trainings and promotions across digital and email, with the goal to restore confidence and encourage the drive market to visit this summer.

In addition to targeted digital media and regional out-of-home advertising, and an integrated social media and influencer campaign, a new television spot will begin airing in select U.S. markets next month. Further, the campaign will be seen on LinkNYC screens and bus shelters across New York City’s five boroughs, through NYC & Company’s collaboration with Intersection and JCDecaux, which will also extend across the globe, valued at nearly $25 million.

As part of the second phase of the campaign, a television and video spot will launch nationally in early July, asking American travelers to consider, “Where Were You in the Summer of ’21?” reminding them that they do not want to miss being a part of New York City’s comeback.

The video depicts the City’s unparalleled diversity, vibrancy and excitement as well as its homecoming to normalcy, underscoring the return of FOMO and driving that message of urgency.

The :30, :15 and :06 video spots will air via a combination of linear TV, connected TV and online video in key domestic feeder markets. A longer version of the video will also be featured on NYCgo.com, and in the coming months NYC & Company will create a series of videos that highlight seasonal, significant events throughout the five boroughs.

For the third phase, NYC & Company will focus on international markets and activate the campaign both digitally and through out-of-home advertisements with global media partner JC Decaux, adding further value to the total campaign effort. It will first launch in Mexico this summer, utilizing the Spanish tagline, “New York City, El Momento es Ahora,” followed by Canada and select countries in Latin America. Designed to be flexible as travel restrictions evolve, international feeder markets will also include the United Kingdom, Europe and other key regions, with translated advertisements to roll out alongside to-be-announced travel partners.

Locals and visitors can browse new five-borough itineraries—and design their own—on NYCgo.com/timeforNYC. New Yorkers are encouraged to invite friends and family to visit, while outside NYC, the focus is on browsing itineraries and entering sweepstakes that will run for eight weeks, with the chance to win trip giveaways.

There are currently 24 unique itineraries online and counting—created by NYC & Company staff and well-known New Yorkers including A$AP Ferg, Celia Keenan-Bolger, Danny Burstein, Bianca Marroquin, Geoffrey Zakarian, Rocco DiSpirito, and the NY Knicks and NY Rangers—and this new permanent tool will continue to evolve and be updated with new itineraries on an ongoing basis.

Through the end of the year, targeted digital media will reach regional and domestic visitors via Facebook and Instagram, while an influencer campaign will feature diverse voices from New York City and beyond. Consumers can engage with the campaign using the hashtag #ItsTimeForNYC.

To help stimulate the City’s meetings and conventions sector, the campaign will also include an iteration titled “It’s Time to Make It NYC.” Next week, NYC & Company will launch a B2B tool kit for the local business community, providing engagement opportunities and ways to help amplify the campaign.

The campaign will once again embrace New York City’s most powerful icon, the Statue of Liberty, representing hope, resilience, opportunity, diversity, new beginnings, and most of all, welcoming openness. Some of NYC’s greatest hits will be featured within Lady Liberty’s silhouette through a lush, vibrant color palette, to support the feeling of life in uncommon abundance. NYC & Company has selected Universal McCann as its agency responsible for strategy, planning, buying, data and analytics.

“It’s Time for New York City” follows the strategy that was outlined in All In NYC: The Roadmap for Tourism’s Reimagining and Recovery, released by The Coalition for NYC Hospitality & Tourism Recovery in July 2020.

NYC & Company predicts 36.1 million people will visit New York City in 2021. This summer alone, 10 million people are projected to visit NYC. Since the quarantine requirement for domestic travelers was lifted on April 1, New York City’s hotel demand has steadily risen from 338,367 rooms for the week ending April 3 to 457,568 rooms for the week ending June 19, a 35% percent increase.