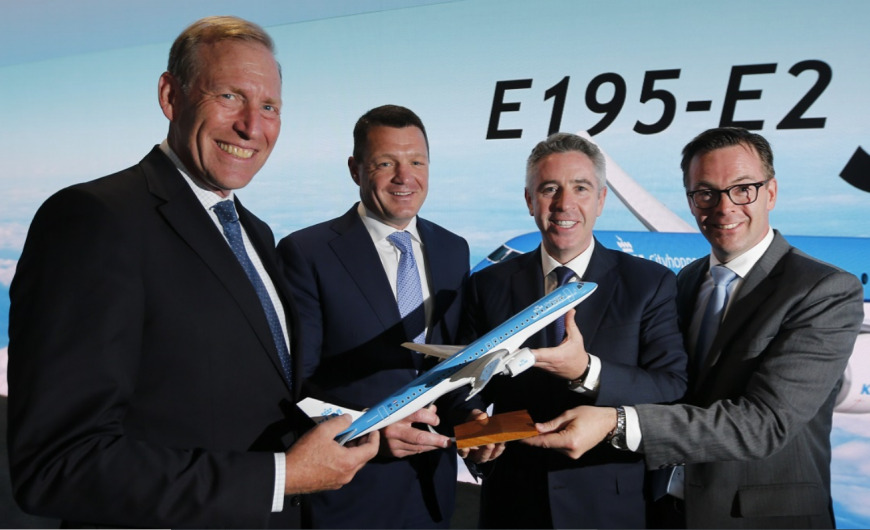 The first Embraer 195-E2 from Brazil arrived at Amsterdam Airport Schiphol this afternoon. The new aircraft type is both quieter and more economical than its predecessor the Embraer 190. The 195-E2 uses 9% less fuel per flight and therefore emits 31% less CO2 per passenger in comparison with the E-190. This new type is also 63% quieter than the Embraer 190. Fleet renewal forms an important part of KLM’s approach towards making its operations more sustainable. Seven new aircraft of this type will be joining the KLM Cityhopper fleet this year. KLM has ordered a total of 25.

The latest addition to the fleet will be taken into operation on 1 March for destinations within the European network. The aircraft can carry 132 passengers, making it the biggest in the KLM Cityhopper fleet, which now consists of 32 Embraer 190s and 17 Embraer 175s. In addition to remarkably little noise in the cabin, passengers get to enjoy the special mood lighting, ergonomically designed seats, extra legroom, USB connections and bigger baggage bins.

Warner Rootliep, Managing Director KLM Cityhopper: “Not only is the 195-E2 an economically attractive aircraft, it also fits perfectly within our Fly Responsibly sustainability approach. This will enable KLM to make its own operations and the sector as a whole more sustainable. Now, more than ever before, we’re committed to reducing the impact we have on our surroundings and our ecological footprint. At present, fleet renewal makes the biggest contribution towards reducing CO2 emissions.”

The new aircraft will be taken into operation on 1 March, operating its first flight to Warsaw. Before commencement of the summer schedule, KLM Cityhopper will take four new 195-E2s into operation.

“We’re incredibly proud that with KLC, we’ve been able to make such a huge contribution towards developing KLM’s European network in recent years. The more efficient, sustainable and comfortable 195-E2 serves to strengthen our competitive position,” adds Warner.

As of today, KLM Cityhopper’s fleet consists of 50 aircraft. This makes KLM’s Embraer fleet the biggest in Europe. Another six aircraft will follow this year, with the remaining 18 being delivered in the years ahead. KLM also has an option on 10 more 195-E2s.