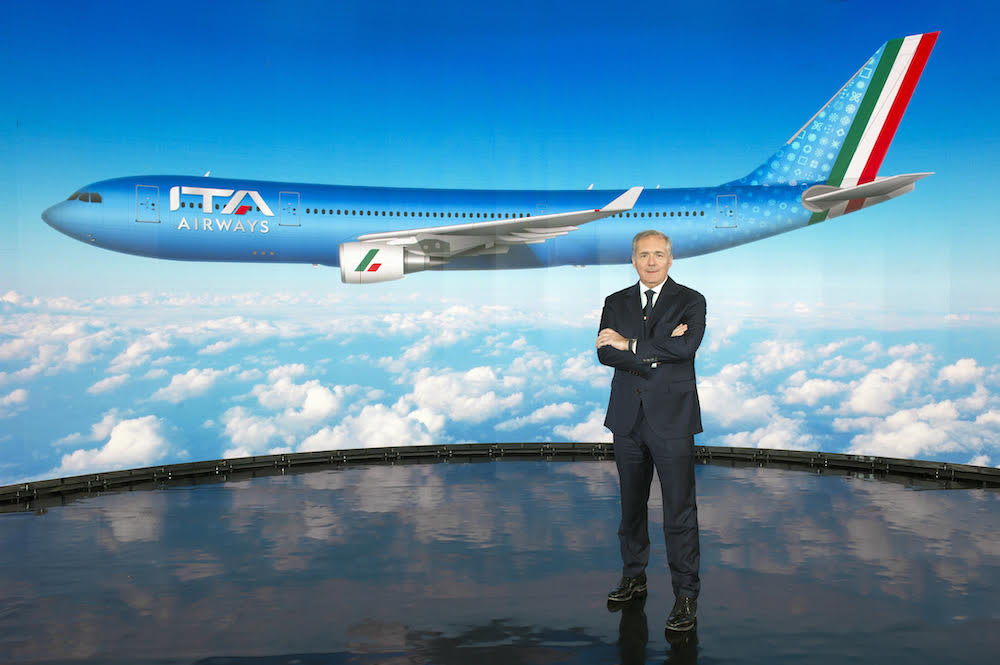 With its first flight, the new "Italian national airline, ITA Airways" was born. A carrier that places passengers at the center of its strategy thanks to efficiency and innovation, inspired and oriented to one of the fundamental pillars of the industrial plan, the "centrality of the customer". That’s the statement.

The last AZ flight, which took off from Cagliari on October 14 in the night and landed in Fiumicino, gives way to the one that departed from Milan Linate at 6.20am, operated with an Airbus A320 coded AZ 1637, departed for Bari, piloted by Commander Fabrizio Campolucci.

With this handover, a very controversial chapter in the history of Italian civil aviation, which lasted 76 years, from 16 September 1946 to 15 October 2021, exactly 27 thousand 758 days, closes with this passing of the beaton.

The brand and the visual identity bear the prestigious signature of Landor & fitch, a well-known brand agency based in Milan. History repeats, so much so that the new course is inaugurated with a historic signature for Italian civil aviation, that of Walter Landor, who already designed the Alitalia flag carrier logo in the ‘60s, in homage to which he takes up the same colors .

The livery of ITA Airways for the base is blue, a symbol of unity, cohesion and pride of the country, above all representatives of sport (which in this 2021 has given us Italians great satisfaction, from Luna Rossa in the America's Cup final to the European football championships , from Olympic golds to the harvest of Paralympic games to the various European championships of other sports) and the Italian national team.

On the rudder the tricolor, on a blue background the white and red gold logo.

The Alitalia brand is also owned, now, by the new company, purchased for “only” 90 million euros against the auction base of 290 requested, with the aim of managing the transition to the new livery and reserving, perhaps, the right to future uses of the prestigious and unforgettable brand.

As in the best tradition, there will also be charter activity with the first Malpensa - Fiumicino flight that will carry the Inter Milano, Serie A champion.

The hub of Rome Fiumicino and Milan Linate airport will be the center of activity  of the carrier, which will position itself as the reference airline for both business and leisure traffic. As it was before Alitalia, ITA will be part of Sky Team gradually guaranteeing its travelers code sharing with all 19 member airlines for connecting flights.

And the fleet? ITA Airways starts with 52 aircraft (7 wide body and 45 narrow body). Already in 2022 the fleet will grow to 78 vessels, with the progressive inclusion of new generation aircraft which by 2025 will reach 75%, with 105 new airplanes (23 wide body and 82 narrow body).

In this way, ITA Airways will have a modern, environment-friendly fleet, which will include cutting-edge technologies, reducing CO2 emissions by 750,000 tons over the period of the 21-25 plan. To keep the fleet green, ITA Airways has signed a Memorandum of Understanding with Airbus for the purchase of 28 new aircraft: 10 Airbus A330neo for long-haul connections, 7 units of the regional Airbus A220 family of aircraft and 11 aircraft of the A320neo family .

Crucial knot, the “Millemiglia” loyalty program, of which it was not clear where it would end. We tell you: it will be replaced by the new loyalty "Volare", active starting today, designed to ensure maximum simplicity and flexibility for passengers.

Registration for the program is available via the web, on the website www.ita-airways.com, and on the Company's APP.

Digitization could not be missing: ITA Airways, with the new Customer Center, provides a virtual platform in order to use new technologies

The “workers” knot is certainly the most difficult to solve. From 26 August ITA Airways launched the campaign to collect applications for professional figures to be included in all areas: from flight and ground operations to staff. Results? More than 30 thousand applications were received.

Now the ITA Airways team is made up of 2,800 employees, of which 1,250 staff and 1,550 flight personnel, of which approximately 30% hired on the market and 70% from the former Alitalia, mainly pilots and stewards.

In 2022, aviation personnel will grow by 1,000 to reach 5,750 in 2025. All ITA personnel will be individually rewarded based on the achievement of the company's profitability and customer satisfaction objectives.

But what do the top management say? “Today is the first day of a story to be written. - declared Alfredo Altavilla, President of ITA Airways - The new brand and the new livery of our aircraft represent the symbol of change, of the beginning of a new adventure. Discontinuity does not mean denying the past, but evolving it to keep it in step with the times, with a new competitive scenario, new customers and other needs to be satisfied. The new national airline is a piece of Italy's overall relaunch strategy, a result to which all stakeholders have actively contributed, starting with the institutions involved.”

The last word to CEO Fabio Lazzerini: “For every end there is always a new beginning. In the sentence that concludes the ITA Airways commercial, there is the thrill of witnessing the birth of something long-awaited and, at the same time, the awareness of the solidity of the Company's prospects to which we welcome today. This is only the first step of an ambitious project: the creation of the new flag company that will connect our country to the world and that will represent it through the work of the women and men who are and will be part of it. In a difficult period for the air sector, ITA Airways was created to intercept the recovery of air traffic in the coming years, strengthened by the foundations of its strategy: sustainability, digitization, customer focus and innovation.”