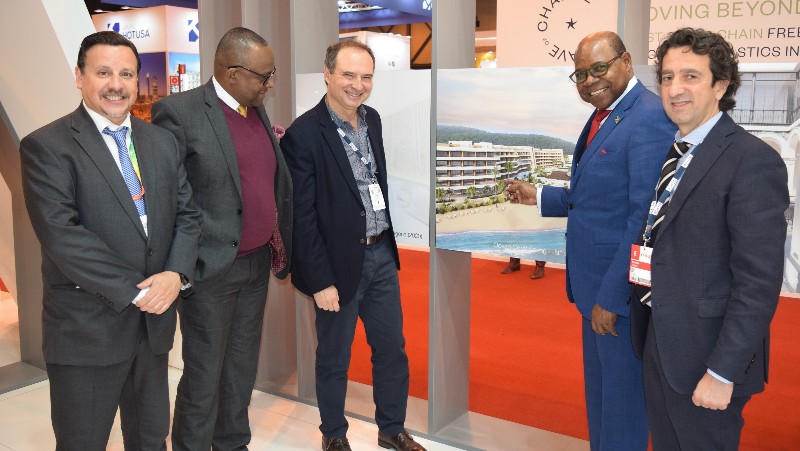 H10 Hotels and Princess Hotels & Resorts are both coming to Jamaica, with a combined 3,000 new rooms set to open on the Caribbean island by 2021.

Following discussions with the two major Spain-based hotel chains, Jamaica’s Minister of Tourism Edmund Bartlett announced at FITUR in Spain this week that Jamaica had secured US$750 million in investment from the hotel companies.

H10 Hotels will construct 1,000 new rooms in Trelawny at a value of approximately US$250 million. H10 currently has more than 55 hotels in 18 destinations.

Jamaica announces resort agreements with H10 Hotels, Princess for 3,000 new rooms
The Hon. Edmund Bartlett, Jamaica’s Tourism Minister (second from right), points to the mock-up of the 1,000 room hotel to be constructed by the H10 chain in Trelawny.

Princess Hotels and Resorts, meanwhile, has 19 hotels. Princess will construct 2,000 new rooms in Hanover, at a cost of US$500 million.

In highlighting the significance of these agreements, Minister Bartlett said: “The value of this investment cannot be overstated as it will transform our tourism product and allow for heavier marketing of the destination.

“These mega projects are ready to go. Funding is in place, lands have been purchased and development ready to begin following the requisite approvals being granted. In fact, H10 will officially break ground on Feb. 6 and Princess Hotels will do so by mid-February,” said Bartlett.

As previously reported Jamaica is boosting its room stock significantly, with other new resort projects including a Hard Rock Montego Bay and a 5,000-room commitment from Karisma. Other major players with refreshed product include Sandals, Playa Resorts and RIU.