New Hotels.com Pricing Index Reveals Where the Hot Deals Are 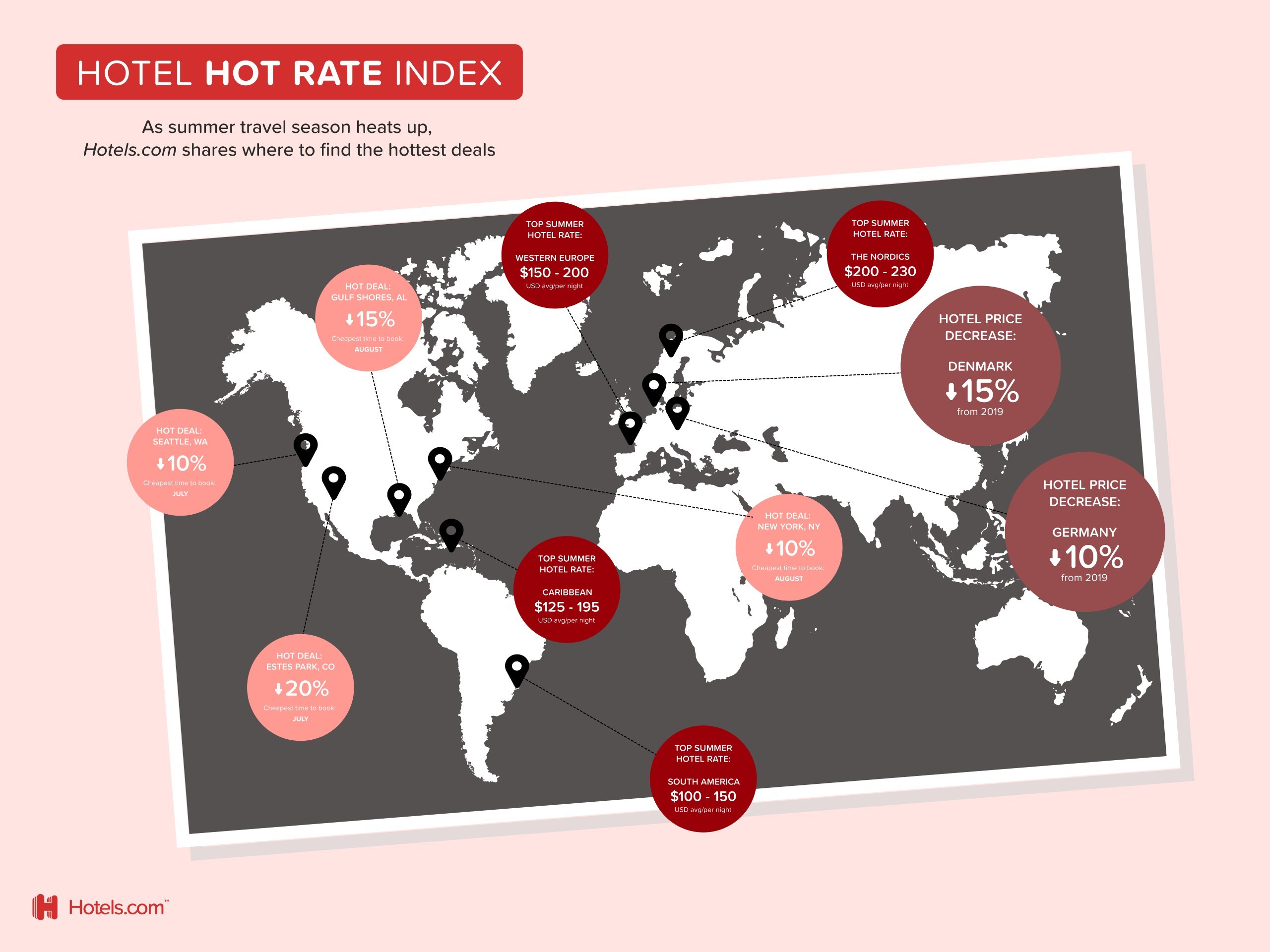 Arriving just in time for summer and what's expected to be a record-breaking travel season, Hotels.com is releasing its inaugural Hot Price Index, which tracks average nightly hotel rates in hundreds of destinations worldwide to help travelers find the best lodging deals.

"Hotels typically increase their rates when demand is high during the busy summer travel season," says Melissa Dohmen, spokesperson and lodging expert at Hotels.com. "But this year more than ever we're starved for a proper summer vacation, and it's dialing up competition for rooms and rates in top destinations. Add in that this is happening at a time when everything seems to cost more, and it's easy to see why some travelers are starting their vacation in search of a good deal."

According to Hotels.com, travelers can expect to pay more for their hotel rooms this summer than in 2019. Current average rates are above $200 a night in top destinations. Some of the most expensive U.S. destinations to book a hotel this summer include the Hamptons, Maui, and Telluride.

Internationally, the best hotel rates are in South America, the Nordics, parts of Western Europe and the Caribbean. Cities in Denmark, the Netherlands and Bahamas are almost 15% cheaper this summer compared with 2019, whereas rates in Italy and France are up about 25%. Saint-Tropez and Turks and Caicos topped the list for overall most expensive summer getaways.

According to Dohmen, vacationers can find plenty of summer savings by planning trips to destinations that are trending cheaper this summer and traveling when rates are at their lowest. "Consider destinations outside of your usual vacation spots and if you don't have to stick to a specific travel date, book during non-peak travel times. Mid-May and the latter part of August can be great times to save as seasonally high prices haven't ramped up yet."

Hot Deals on Domestic Travel
Fans of the great outdoors, city life or beaches can save this summer depending on when and where they travel. Hotels.com analyzed thousands of rates on its site and mobile app to generate a month-by-month guide on where to go to uncover below-average nightly rates across the country.

As travel restrictions ease in many parts of the world, globetrotters are eager to go abroad again. Lucky for them, the Hotels.com Hot Price Index uncovered international destinations with rates at or below $200 a night.

As a reminder, travelers should check for travel advisories and restrictions in their vacation destination and always follow health and safety guidance from health officials and local authorities.