Q & A with Tomeu Bennasar, CEO of Soltour Travel Partners 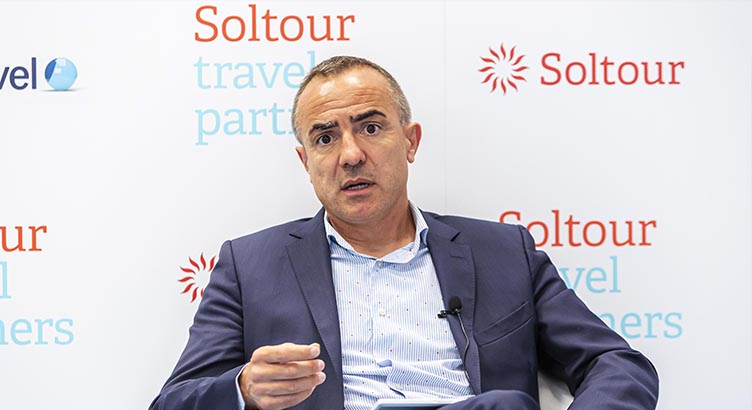 The new business project, Soltour Travel Partners, is the result of an alliance with Logitravel and was created with the aim of advising travel agencies to contribute to the creation of an offer that encourages people to regain their enthusiasm for traveling.

This is how Encarna Piñero, president of Grupo Piñero, defined it recently during the presentation of the product in the Dominican Republic, before 300 travel agents and in the presence of the Dominican president, Luis Abinader.

During the recently-concluded special edition of FITUR 2021 in Madrid, Spain, Caribbean News Digital had the opportunity to talk exclusively with Tomeu Bennasar, CEO of Soltour Travel Partners, about the prospects and challenges this new business project could face on the road ahead.

Does the emergence of Soltour Travel Partners have much to do with what is happening in Spanish tourism, with the birth of new tour operators and airlines?

I don't know if it has anything to do with it because the world of tourism is changing a lot. There are spaces that are no longer occupied and others that are developing very rapidly. And the players in the market are also moving very fast; there is a much more collaborative spirit in the sector, and we see mergers, we see that there are those who are having a hard time and are closing, and in that sense our movement is one of synergies, a movement of adding, in this case two very complementary companies, such as LogiTravel and Soltour.

What is Soltour's contribution in millions of euros and what is Logitravel's?

In 2019, the joint project made a joint contribution of about 300 million euros. Soltour's contribution is 180 million and the rest is borne by LogiTravel. It is no less true that Soltour's business is quite stable and our expectation of development in the short term is to reach around 500 million euros in turnover, with the short term being understood as the years 2022 and 2023.

Taking into account that Soltour had a very organized structure with many years of operation, while LogiTravel is a more active structure, how are you going to distribute the management positions and how will the hierarchy work in this organization?

The structure is very complementary and there has not been any kind of organizational collision, so there has been no conflict in that sense. Soltour fits perfectly with Smytravel's organizational architecture because the latter is organized by business lines, while Soltour, one of the lines it incorporates is the basic tour operator function, so it would be one more business line within that architecture. I am the CEO, Javier Castillo is still the CEO of Soltour and he is also my deputy. The financial movement comes from Soltour. Then come the product and contracting managers, who come from Soltour.

What technological product can Smytravel chip in that is not easy for Soltour to acquire?

When we talk about technology, it is clear that Soltour has its own solutions, but they are much less evolved solutions like those of Smytravel. There are other cases where this is not the case because, for example, Soltour has solutions that are very advanced in the area of airline contracting. It is a question of evolution because Smytravel has always invested much more money in technology and has more resources allocated to this area.

What does the fact that Soltour has such an important hotel group behind it, such as Bahia Principe, contribute to Smytravel's structure?

The first thing is that we have an exclusivity contract whereby if a tourist wants us to make a package for him and wants to sleep in one of the marvelous Bahia Principe hotels, he has to book it through Soltour, and that gives us a lot of strength. That strength in the product translates into customer penetration. The Bahia Principe client is a very demanding client, very consolidated, and that makes the product very much in demand thanks to these exclusivities.

How long do you think it will take to consolidate this merger?

We will see the first results this summer and they will be diluted by the situation we are in. But around 2022, the company will have already made significant progress and by 2023 we will see a single project.

The disappearance of Globalia as a concept and the birth of Ávoris and World2Meet, or the birth of a new airline, such as Interjet, how can they support your new project?

We are neutral in terms of sales, we are independent, and that is our flag for the customer and for sales. We work with an exclusive product, but we are not married or linked to any airline or any supplier. This advantage allows us to adapt our offer to the market situation. For example, Air Europa becomes a natural ally of our project because Air Europa was Travelplan's tour operator and now Travelplan belongs to a group that has its own airline, and logically in the long term we must meet along the way, and that is a line we are following.

If Air Europa is their ally, then so is Iberia, isn't it?

Yes, and now we think that IAG uses a strategy of different brands and it is logical that one of them, which would obviously be Air Europa, should be used to make good turoperation agreements.

All of us in the distribution business have the obligation and the responsibility to recover demand, and that means that people want to spend again on travel. That is not so clear because the crisis has been long and deep, and people have become accustomed to other types of leisure. But our obligation, as it has already happened in other periods and in other situations, is to generate that illusion and that demand again.

In terms of pricing, I don't envision a scenario in which price leverage is used. I think companies have suffered too much to work at a loss or at margins that do not allow the company to be viable. I do not believe that this is the path that the tourism sector, in general, is going to follow. I am convinced of it, because at this time the client does not demand supply, but security. There are many other attributes that are more important than price. I also believe that as long as the current panorama of players is configured, there will be no price war. Quality versus volume, price versus profitability.