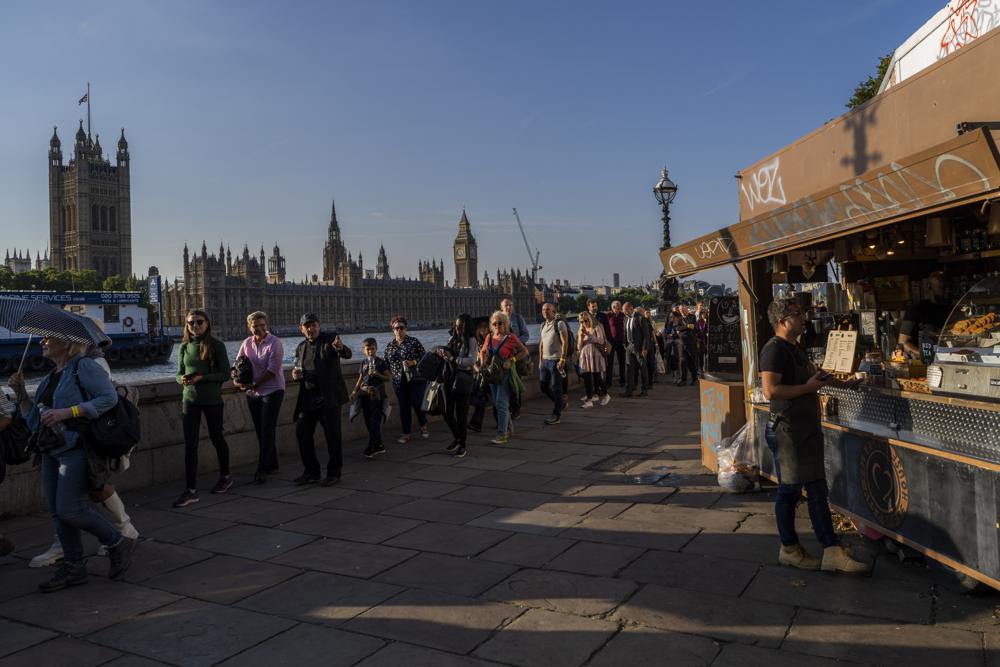 (AP) - Royal fans have poured into the heart of London to experience the flag-lined roads, pomp-filled processions and, above all, brave a miles-long line for the once-in-a-lifetime chance to bid adieu to Queen Elizabeth II, who died after an unprecedented seven decades on the throne. And while they’re here, they’re packing hotels, restaurants and shops.

Visitors crowding into central London from as far away as the U.S. and India for the historic moment are giving a boost to businesses at a time when the British economy is facing a cost-of-living crisis fueled by the highest inflation in four decades and predictions of a looming recession.

The pomp and pageantry leading up to the funeral for Britain’s longest-reigning monarch underscored the royal family’s power as a global attraction, from an elaborate military procession for her crown-topped coffin drawing live viewers around the world to piles of flowers filling up Green Park near Buckingham Palace and gift shops hastily churning out souvenirs commemorating the queen’s life as people clamor for mementos.

Hundreds of thousands are expected to pay tribute to the queen in the four days that her body lies in state ahead of her state funeral Monday, pushing up demand for hotel rooms in central London that in some cases have doubled in price.

Hundreds of world leaders, from U.S. President Joe Biden to Japan’s emperor and empress, plus their entourages need places to stay as they arrive for the queen’s funeral. So do police officers coming from around Britain to help with security.

Occupancy levels could reach an all-time high of 95%, according to London-based group-booking platform Hotelplanner.com.

On the Thames, the Riverside Cafe that’s next to the mileslong, round-the-clock line for people to get a glimpse of the queen’s coffin, has been “extremely busy,” manager Zab Istanik said. He’s been opening two hours earlier than normal, at 7 a.m.

The U.K. was already an attractive place to visit as demand rebounds for international travel since the COVID-19 pandemic and the weakened pound, especially for American visitors, makes transatlantic travel more affordable.

University professor Chad Broughton, 51, who was visiting London from Chicago with two friends after a long pandemic delay, said their hotel room in the tourist-heavy Covent Garden neighborhood was pricey at 400 pounds ($456) a night.

But the trip to London was unique. “Seeing all these people queued up, seeing the reaction on BBC and just feeling this, you get a sense of how important it is to the people here,” he said.

Plus, costs were offset by the currency’s fall, friend Josh Walsman said.

Budget hotel operator Travelodge said it’s ordered extra breakfast supplies for its 78 London hotels for Monday, saying it expects many mourners to start their day with a “traditional full English” breakfast. Pub chain JD Wetherspoon says it will keep its pubs in central London open Monday during the queen’s funeral.

Some analysts predicted the overall economic boost for the U.K. from the royal mourning period would be limited. That’s because it would be offset by supermarkets, retailers, hardware stores and other businesses closing for the funeral Monday, which has been made a public holiday.

However, renewed interest in the royal family could give an extended boost to the travel and tourism industry, said Tim Hentschel, co-founder and CEO of Hotelplanner.com.

“Yes, short term, the bank holiday will probably cut down productivity a little bit,” Hentschel said. But “the overall momentum that the U.K. is going to gain from all the tourism that’s going to flock here over the next few days and then over the next few months will far outweigh” the short-term loss.