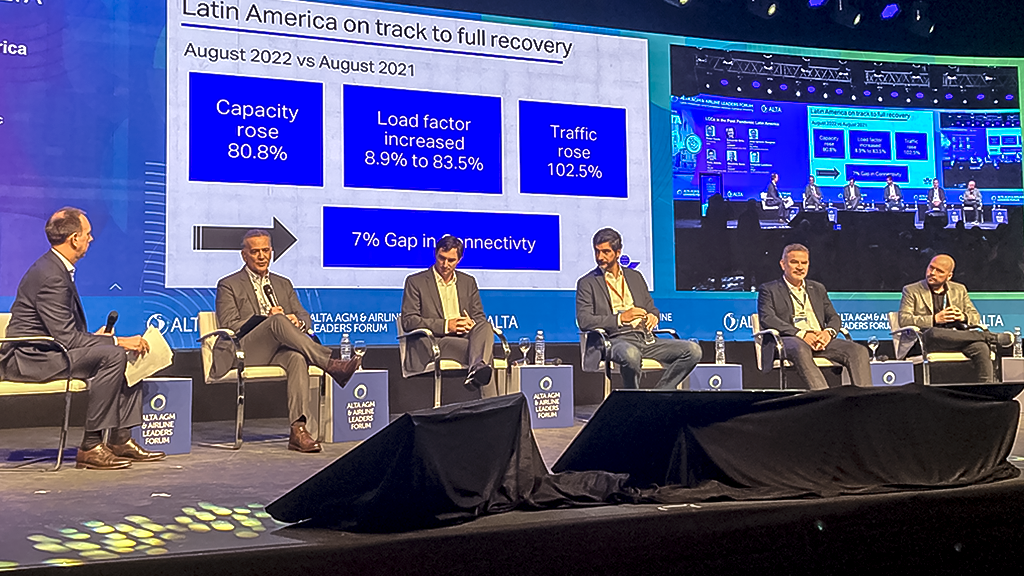 The executives agreed that the region has a great opportunity to develop regulations that stimulate the growth of this segment under equal conditions and that it is necessary to review the rates, charges and costs that today are an obstacle in many markets.

Eduardo Lombarda, CEO of Wingo, highlights that they have registered a 200% growth in available seats, doubled the fleet and increased the flight portfolio. “However, the position will be very cautious. This is an industry that, if one ends up too oversized, can destroy value very quickly, and despite the fact that we have grown rapidly and that demand has responded well, we believe that we must be very careful in growth and, above all, very flexible”.

José Ignacio Dougnac, CEO of Sky Airline, described that today the Low Cost airline market has grown, it has very competitive players, with a modern aircraft fleet and considers that they are now playing in a very competitive league. “The competition is tough. It is important to adapt to changes and conditions, for example exchange rates are very volatile. We got to have more than 50% of the total cost in fuel and the ability to adapt is key”. He highlighted that flexibility is key in the business to take care of the passenger.

Félix Antelo, CEO of Viva Air, stressed that low-cost airlines have always emerged stronger from crises. "They have a faster recovery capacity and in Colombia, who led the recovery of air traffic, the Low Costs led that recovery, but we must also recognize that the burden that has been brought for years is still great."
He insisted that the air and commercial air sector needs the support of authorities on tax issues, better regulations. "There is work to be done between the public and private sectors." He stressed that in Colombia VAT on airline tickets was eliminated, and if this measure is not renewed, it will affect the cost to the passenger.

The CEO of Viva Air raised the need for the Government and airlines to work together to promote more air travel and go from 0.5 to 2 air travel per person per year on average.

Estuardo Ortiz, CEO JetSMART, highlighted that it is positive that aviation in Latin America has recovered faster than in other regions. But he added that many challenges remain. Ortiz said there is the cost challenge of taxes and boarding fees that are imposed on tickets in many markets. He explained that there are international flights in which 70% of the cost of the ticket is made up of taxes. "If we want to think and dream of an aviation that connects all Latin Americans, as Europe has done, it cannot be done if you are going to pay 150 dollars in taxes per ticket." This airline has the focus of closing the year with 60% more seats available than in 2019.

Mauricio Sana, CEO Flybondi, agreed that it is time to have better regulation that encourages Low Cost airlines to grow in the region. "Clear long-term policies are needed to encourage the market," he said, indicating that they are pressured by taxes and fees that make tickets more expensive. He highlighted that despite these obstacles they are flying with 86% more passengers than in 2019.

He said that there is an efficient way to operate without burdening passengers with tax surcharges.

One of the proposals made by the market leaders of LLCs is that a special regulation be achieved for regional flights that are aimed at encouraging the operations of this segment, with lower boarding fees and taxes.

“What we want is to make it more accessible to travel. Think of an ultra-low-cost model for aviation. How we focus on efficiency and price”, insisted the CEO of JetSMART.

Likewise, the CEO of Sky said that it is not possible for 50% of the cost of the ticket to be from fees and taxes that discourage passenger demand. "We need to stimulate passenger traffic and that there are regional shipping rates that are cheaper than international ones," he said.

"Many governments and politicians continue to think that traveling is a luxury, it is not, it is a necessity and it is an essential service in many countries," Antelo stressed.

Wingo's CEO stressed that it is essential to operate on equal terms to be competitive. "There is a huge opportunity to make better use of airport infrastructure today."

For the CEO of Flybondi, low-cost airlines not only stimulate tourism, they also move and mobilize small businesses, entrepreneurs and people who need to travel efficiently.

The CEOs also highlighted that in the midst of the most competitive cost challenges, they should focus on achieving environmentally sustainable aviation.