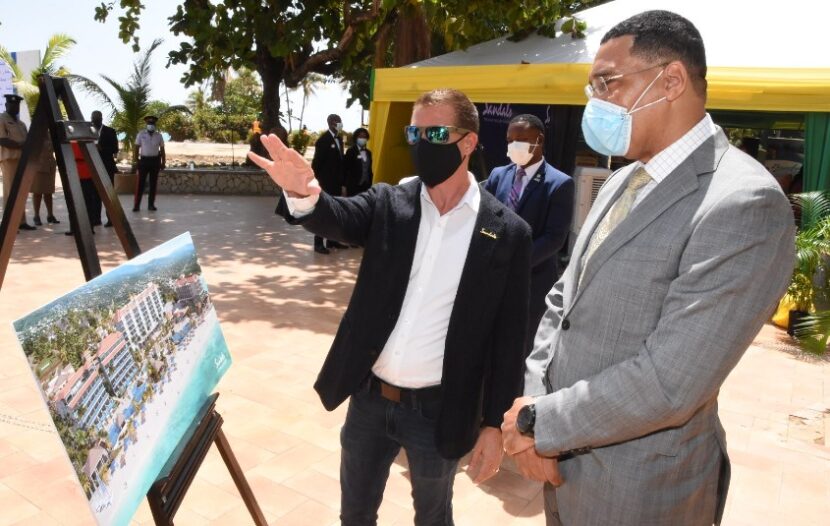 Sandals Resorts International (SRI) has broken ground on Sandals Dunn’s River, the first of three new resorts coming to Jamaica as part of an ambitious development project valued at US$230 million.

Calling it a “poignant and tremendously significant time,” Sandals Resorts Executive Chairman Adam Stewart honoured his late father, Gordon ‘Butch’ Stewart, who passed away in January 2021, at an official groundbreaking ceremony on May 26.

Phase 1 of the development plan begins with the total transformation of Sandals Dunn’s River, which returns to the Sandals family under the same moniker as when it was originally added to the Sandals portfolio in 1990. SRI has targeted completion of the new Sandals Dunn’s River for Q4 in 2022. Upon completion it will offer 260 rooms including 48 signature SkyPool Suites, a first for Jamaica, which will feature a private cantilevered, solar-heated plunge pool with infinity edge. There’ll also be 12 Swim-up Rondoval Suites with many featuring a Rooftop Terrace, both signature Love Nest Butler Suites, as well as 10 restaurants, including a specialty rum bar inside the brand’s newest Latin Fusion restaurant concept ‘Azuka’, nine bars, seven pools including two river pools, and the Red Lane Spa.

In addition to the $230 million development of Sandals Dunn’s River and Sandals Royal Dunn’s River, SRI is also planning a $250+ million renovation of its third new location in Ocho Rios. Beaches Runaway Bay Resort will be the third family-friendly Beaches Resort in Jamaica. Upon completion, it will feature an estimated 400 expansive one-, two-, three- and four-bedroom suites, plus access to Runaway Bay Golf Club and its par-72, 18-hole championship golf course.