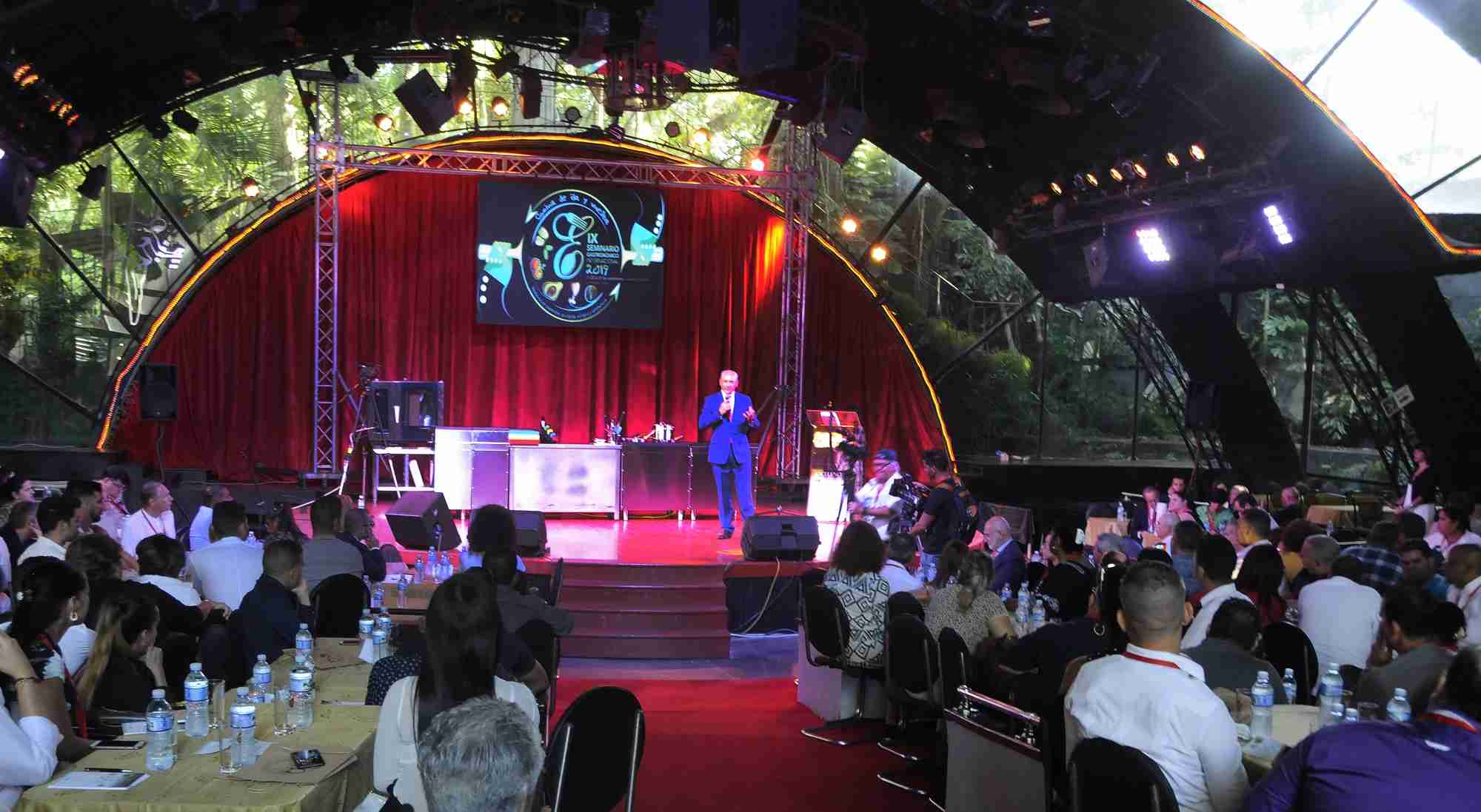 The IX International Gastronomic Seminar organized by the Excelencias Group had on Wednesday an exceptional inaugural day for the high academic level of lecturers, the attendance of about 300 professionals from the sector gathered in the cozy Arcos de Cristal Hall of the famous Cabaret Tropicana and the suggestive theme "Back-and-Forth Cooking", which laid on the table the delicious mix of flavors hailing from Europe and America.

The event has been conceived as an encounter with specialists of the highest level aimed at knowing and debating their experiences in forging a strength for tourism development based on a gastronomic culture that unite ancestral traditions and visions marked by new technologies and trends.

This ninth edition in Havana of the Gastronomic Seminar organized by the ExcellenceS Group, marked by a contagious atmosphere of friendship and desire to exchange ideas and experiences, showed a clear path of success to its participants, both in the interventions of welcome from the hosts as at the first master lectures and culinary demonstrations.

The inaugural event was attended by the attendees of the president of the Excellence Group and Vice President of the Ibero-American Academy of Gastronomy (AIBG), Mr. José Carlos de Santiago, who extolled the values of culinary for the industry health and satisfaction of people.

He recalled the path taken in the promotion and development of these meetings, each year more numerous and prestiged by the assistance of renowned chefs, sommeliers and specialists of good cuisine, as a modest contribution to the efforts of Cuba and Latin America, represented by attendees from various countries attending the event, to achieve higher levels of satisfaction of its visitors.

He also took the opportunity to advocate for peace and understanding among all nations and repudiated the dire effects of all sanctions and blockade systems, such as the one on Cuba, while calling for its immediate lifting, in a declared feelings of friendship and sympathy," he said, "towards the Cuban people.

In turn, the Ambassador of Spain to Cuba, H.E. Mr. Juan Fernández Trigo, who emphasized the historical ties between the two nations and the will expressed in numerous actions throughout this year, when Havana celebrates its 500th anniversary, which will be much more in tense," he said, "in the remainder of 2019 and the upcoming 2020.” 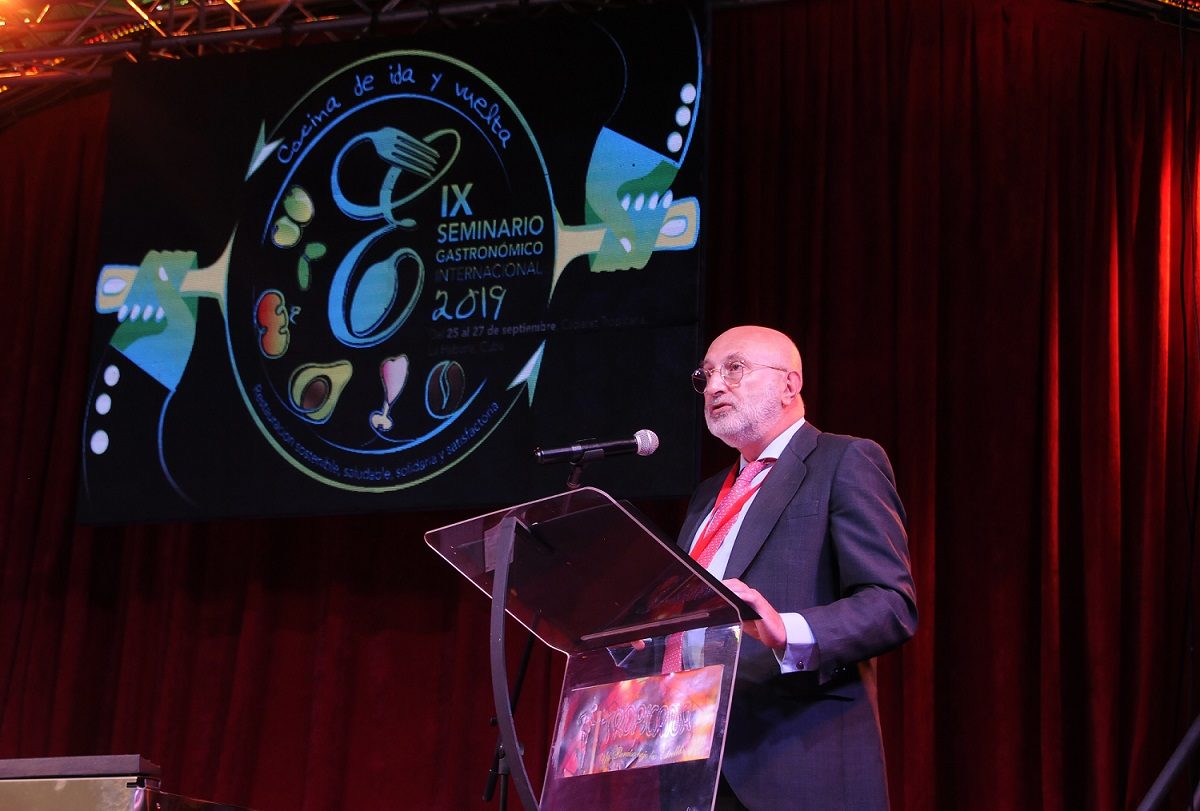 Speaking at the event, the Vice-President of the Provincial Assembly of People’s Power in Havana, Tatiana Viera, thanked the Excelencias Group for this initiative, which strengthens the professional training of the gastronomic tourism sector, as well as many for many others attitudes of Mr. José Carlos de Santiago, whom he distinguished as "great friend of Cuba’s" and of the wonder city’s, that celebrates the 500th years of its foundation.

He noted that this year enormous efforts are made, despite the existing limitations, to restore all gastronomic establishments dedicated to visitors and residents, some of them emblematic centers of Havana cuisine.

In a preview of what will be the capital's grand 500th anniversary celebration, the vice-president of the provincial governing body announced that on the eve of that birthday a "great family dinner" will be held at all state-run restaurants and particular people in the city.

The inauguration also featured a video-taped message from AIBG President Rafael Ansón, who wanted successes to the seminar and highlighted the bank's rapid growth in the Americas. 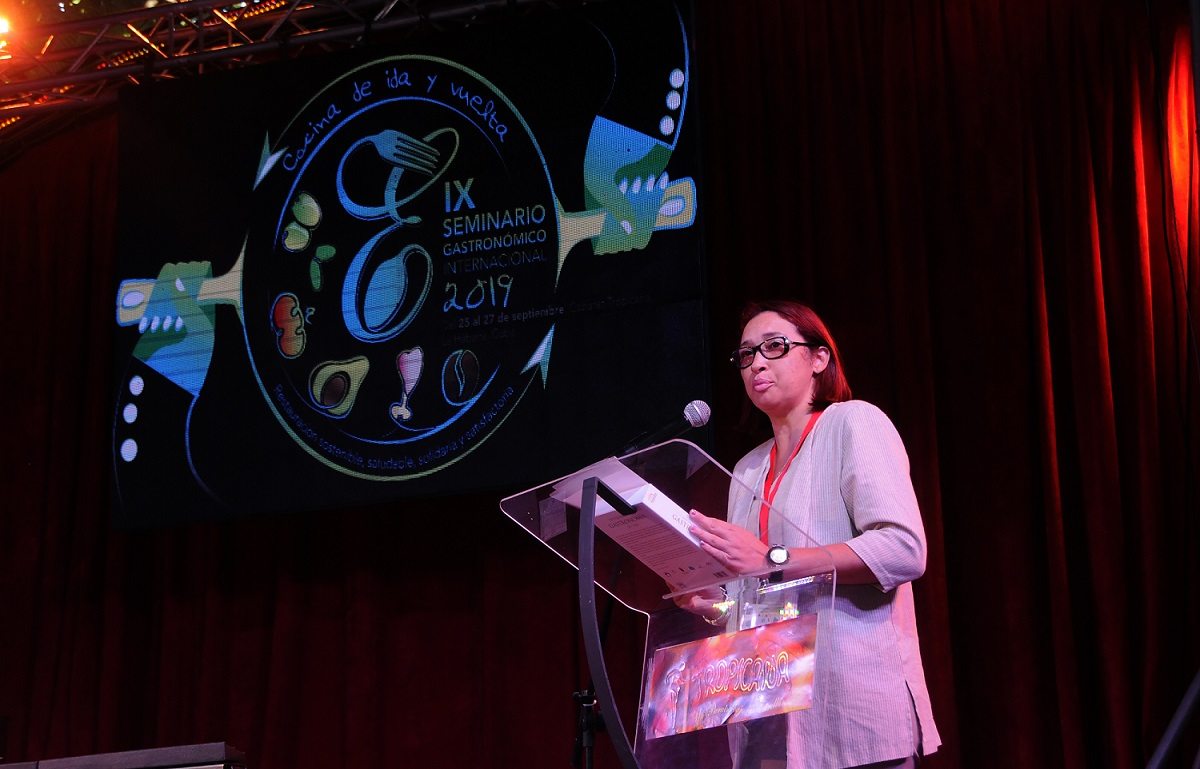 Thus the way was opened for the first conference of the initial day, by Antonella Ruggiero Sanssone, Director General of the AIBG, who made a dissertation on the vast management of the entity under the title "The 'new' Ibero-American Academy of Gastronomy", which included details of its print and digital editions, radio and television programs, as well as interesting competitions, all in terms of rescuing and valuing the cuisine of this vast geographical and cultural territory.

Another very friendly and valuable conference, rich in historical details, anecdotes and waste of erudition, was made by the Spanish professor and researcher Julio Valles, who addressed the central theme of the Seminar: The cuisine back and forth, from the "impact" he had in "the exchange of products between Europe and America".

In a friendly dialogue, illustrated with images and videos, Valles talked for almost an hour – without causing tiredness – revealed in detail what was the coming and going of potato, corn, cocoa, tomato and American pepper from America – in the hands of Christopher Columbus and his successors-  towards Europe, where rice, garlic, sugar cane or pineapple arrived, which without being Europeans traveled on their ships to the New World, such as the first vine stocks and wine.

Then followed a friendly show cooking about the elaboration of a "rice a la chorrera" (a substitute of paella) that joined on the main stand the famous Cuban singer Haila María Mompié and her compatriot and famous cook Ketty Fresneda, finalist of MasterChef Spain 6, of Spanish Television, Master of Sweet Cooking at the Basque Culinary Center, a true gastronomic influencer, brand ambassador and foodie.

"It smells like it feeds," Haile said at a Cuban start, the audience laughed and when they said three of the attendees could come to eat, many were left wanting, which they could satisfy at the lunch of the event, which included it as a dish of the day.

The table was served for the turn of sommelier Guillermo Cruz, holder of the distinction "Best Sommelier of Spain in 2014", Ambassador of the Pago de Carraovejas winery, who offered a true Magistral Conference – a walk through the corners of the history of the wine industry- under the title "the vine back and forth in Latin America".

His dissertation, full of teachings enclosed in thought-out phrases, "no wine is great if it is not shared, singular moments must be democratized" captivated the audience for almost an hour, virtually mesmerized by that magical history of the journey of the vine, its appearance in European lands, its almost disappearance by the tragic epidemic of the Filoxera, and its salvation and resurrection in America, in the highlands of Chile, Argentina and Uruguay.

The next day would bring many more surprises of this IX International Gastronomic Seminar planned by Excelencias Gourmet in a true boast of dedication, mobilizing so much talent in favor of a mission as noble as to make it more rich, joyful and satisfying people's lives and families around the table.