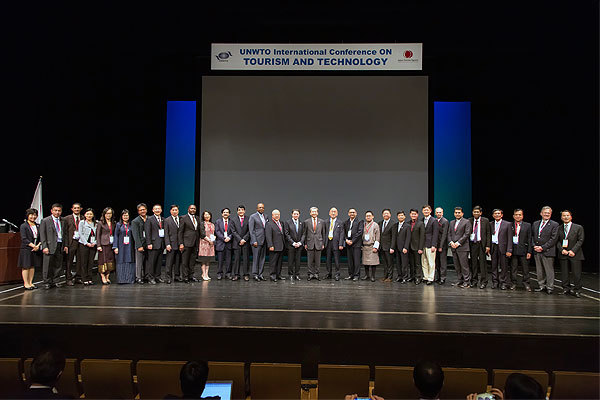 Over 400 participants from 26 countries gathered in the city of Nara, Japan, to discuss the impact that new technologies are having on the tourism sector and how these can help the sector to further develop at the UNWTO International Conference on Tourism and Technology.

It was conducted within the framework of the 28th Joint Meeting of the UNWTO Commission for East Asia and the Pacific and South Asia from 1-4 June 2016.

The 28th Joint Commission’s meeting discussed UNWTO’s Program of Work for Asia and the Pacific, the link between tourism and security, and the ethical approach of the sector.

The Conference was the first of its kind organized by UNWTO to highlight the linkage between new technology and tourism in the Asia-Pacific region in order to examine the current emerging technologies that are of primary relevance to the tourism sector.

As summarized by Akihiko Tamura, Commissioner of the Japan Tourism Agency of the Ministry of Land, Infrastructure, Transport and Tourism of Japan at the Opening: “Our work embraces not only tourism, but also transportation and infrastructure policies that require the latest advanced technologies. Finding out how to raise travelers’ satisfaction levels through various experiences and activities during their travels is a challenging but crucial task for us.”

To this, the UNWTO Secretary-General Taleb Rifai added that “Two major revolutions have marked the last decades: the travel revolution, which has positioned tourism as a fundamental element of our lives, and the boom of new technologies that have changed the game for many sectors including tourism. In both revolutions, nations from Asia and the Pacific have emerged as leaders.”

As estimated by UNWTO, 2030 will witness 1.8 billion international tourists travelling around the world. Of those, 535 million international travelers will visit Asia and the Pacific – a figure which almost doubles the current number of inbound travel to the region. In this framework of continuous growth, innovations brought to the tourism field by technological advances were identified during the Conference as opportunities to enhance the sector.

In this regard, UNWTO Secretary-General Taleb Rifai underlined that the priority areas of the Organization such as making travel safer and more seamless through processes such as the e-visa, improving the quality and competitiveness of destinations and businesses, can be materialized in a better manner through innovation and technology.

Additional topics such as the use of ICTs within the tourism sector, consumer trends and new business models were also debated in the sessions. Mario Hardy, CEO of the Pacific Asia Travel Association (PATA), highlighted the new innovations that are changing the travel industry including crowdsourcing, the sharing economy, 3D printing and wearables, among others.

On the future impact of new technologies in the tourism sector, Yuri Furusawa, Vice-Commissioner of the Japan Tourism Agency, mentioned that “Technological progress is enabling people to travel more easily, and we now live in an era in which, each year, 1.2 billion people enjoy overseas trips. Travel encourages direct human and cultural exchange, creating a basis for people to learn more about the importance of each other’s cultures and lives, and to live in harmony. Technology has made an immeasurable contribution to such developments.”