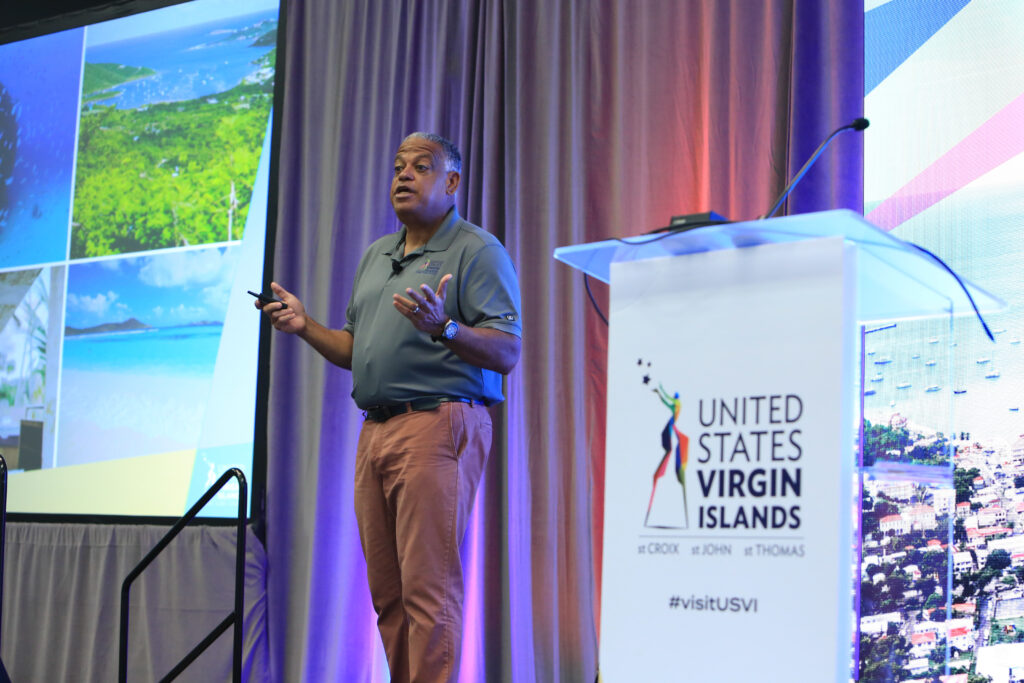 The USVI footprint, as a major sponsor, remained visible throughout the entire conference showcasing the islands as a marquis Caribbean destination, which stands ready for international business. Branded activations included USVI imagery in the conference's app and across the show's entrance and floor, the USVI logo was prominently positioned in all programs and IPW branded signage. The department showcased the territory's rich culture through live performances at three major events with local dancers, Mocko Jumbies, and a steel pan drummer. Key events included - USVI Media Marketplace, which included a ribbon-cutting ceremony and a reception with USVI inspired dishes. At the reception, Commissioner Joseph Boschulte gave brief remarks and warmly introduced Chris Thompson, the CEO of Brand USA.

Over 4800 conference participants energetically engaged with an estimated 1000 exhibitors on the conference floor. The USVI team conducted 60+ appointments from buyers, airlines reps, DMOs, and international press at the destination's booth. The Commissioner and other key team members met with over 30 media outlets during the media marketplace all eager to write about the destination's new and exciting developments, as well as unique stories.

Commissioner Joseph Boschulte presented tourism updates to over 200 journalists at the USVI press conference touting the Department of Tourism's strategy of aggressively focusing on increasing airlift and overnight stays resulting in the region's incredible tourism growth despite the pandemic and ongoing recovery post 2017 Hurricanes.

Destination highlights shared during the press conference include-

- Effective as of June 1, the USVI Travel Screening Portal was removed from USVI travel policy dropping restrictions for all domestic travelers. Federal guidelines and restrictions will continue to apply to international travel, including air travel from the British Virgin Islands.

- At the center of culture, Festival continues in the U.S. Virgin Islands with the 68th Celebration of St. John festival returning June 26 - July 4. Followed by 70th Annual St. Croix Festival, known as the Crucian Christmas Festival this December.

- Described by many sailors as "Heaven on Earth," the U.S. Virgin Islands is considered one of the best sailing locations in the world. This November, the Virgin Islands Professional Charter Association will host the USVI Charter Yacht Show.

- New to the US Virgin Islands, the Department of Tourism recently announced a three-year partnership with Uber Soca Cruise, widely known in the Caribbean as the largest soca fete on the sea.

More than 60 countries gathered in Orlando, Florida, for the 53rd annual IPW, the travel industry's premier international marketplace and the number-one driver of international tourism to the United States. Travel professionals from around the world gathered at IPW, including hotels, attractions, sports teams, cruise lines and airlines as well as tour operators, buyers and wholesalers.