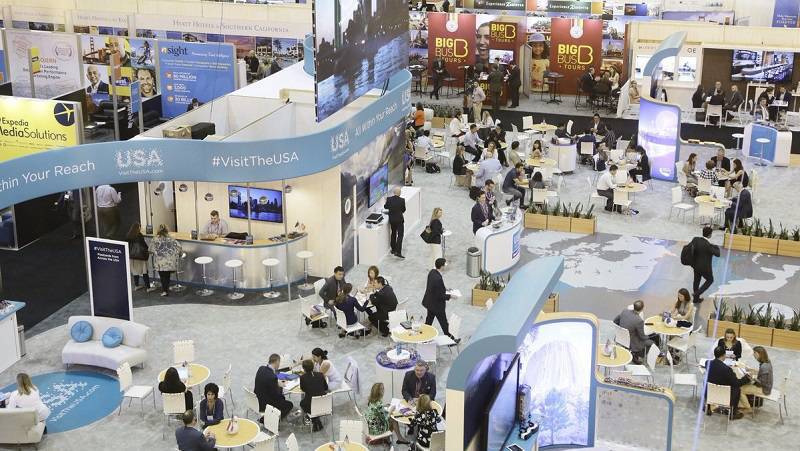 The major annual event at which U.S. destinations, travel businesses and attractions work to attract international visitors kicked off at the Walter E. Washington Convention Center on June 3 with a topical overarching theme: "One Big Welcome."

This is the first time Washington will host the U.S. Travel Association's annual trade show known as IPW, which was awarded to the nation's capital in 2013.

The travel industry is not unaware of the backdrop against which it will market the U.S. as a destination for travelers around the world.

"America's relationship with the rest of the world in this era of transition and disruption is on minds across the globe," said U.S. Travel Association President and CEO Roger Dow. "Washington is one of the most-watched cities in the world, yet one of the least understood. Capitol Hill isn't just the mess you see on the news—it's actually a vibrant neighborhood with parks and cafes. We need international travelers to realize they should come see this place for themselves—and that America wants them here."

With the unique intersection of politics and travel at this year's IPW, U.S. Travel is offering special credentials to Washington, D.C.-based journalists to attend Dow's 10:30 a.m. press conference and tour the show on Tuesday, June 6. Media can obtain credentials by reaching out to U.S. Travel press contacts.

IPW, now in its 49th year, generates over $4.7 billion in future travel to the U.S., by directly convening U.S. destinations, hotels, attractions and wholesalers for three days of intensive pre-scheduled business appointments with international buyers and travel media.

This year's IPW is set to welcome more than 6,000 attendees from 70 countries, including over 1,300 international tour operators and other businesses that book travel to U.S. destinations, with a record number of delegates from China; nearly 500 international and domestic journalists; and representatives from over 1,100 U.S. destinations, hotels, attractions and other travel businesses.

U.S. Travel and Brand USA, America's tourism promotion agency, have partnered with Destination DC to stage the event, which will generate major returns for the local economy for an estimated three years after IPW concludes. According to the independent research firm Rockport Analytics, IPW is expected to generate $1.7 billion in economic impact to the city of Washington, D.C. and attract more than one million additional visitors to the Washington, D.C. area during that time.

IPW attendees will also have the opportunity to join exclusive tours of Washington, D.C. and the region, and enjoy spectacular evening entertainment at iconic sites, including the opening night event at the National Air and Space Museum, the press brunch at the Newseum, a VIP dinner at Washington National Cathedral and the closing night event at Nationals Park.

All the while they will be buffeted by the "One Big Welcome" branding created by the host organizations for this year's event—starting the moment they get off the airplane, with welcome lounges sponsored by Destination DC at Dulles International and Reagan National airports.

Scheduled for June 3-7 at the Walter E. Washington Convention Center in Washington, D.C., IPW is the travel industry's premier international marketplace and the largest generator of travel to the United States.