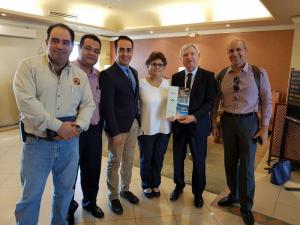 The Saltillo (Mexico) Bureau of Conventions and Visitors from Saltillo and Termatalia have signed an agreement for collaboration and mutual promotion.

The signing of the document was attended by representatives of the Government of Coahuila, the Executive Director and other officials within the organization. Saltillo CVB now becomes a strategic partner of the international fair on thermal tourism, health and welfare, slated for Arteaga/Saltillo, in the Mexican State of Coahuila, from September 29 to October 1, 2016.

This agreement includes the mutual promotion of activities undertaken by both entities and the possibility of the Mexican company to attend the fair as an exhibitor in the upcoming edition of Termatalia. For its part, Saltillo CVB will spread out information about the international fair and its program of lectures among its members through promotional material or the broadcast of videos.

Saltillo CVB will be providing Termatalia with organizational tools in terms of coordination for receiving incoming attendees and guests. Saltillo CVB had already attended Termatalia in Argentina and last year’s edition in Spain.