Hurricane Nora on track to Skirt along Mexico’s Pacific Coast 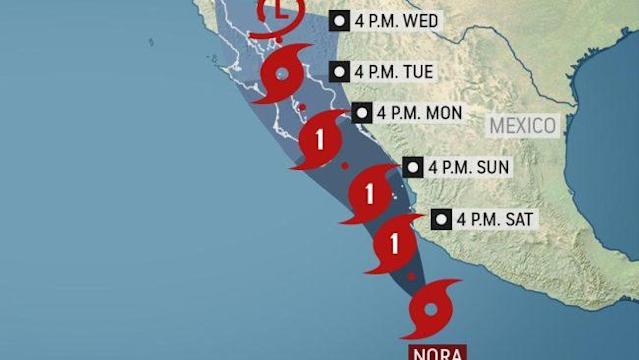 (AP) - Hurricane Nora formed early Saturday in the eastern Pacific on a forecast track that would bring it near the Puerto Vallarta area and then head toward a close encounter with resorts at the tip of Baja California Peninsula.

Nora had maximum sustained winds of 75 mph (120 kph) Saturday morning, with tropical storm force winds extending out 205 miles (335 kilometers) from the center in some places.

The storm’s large wind field and heavy rains mean much of Mexico’s central and northern Pacific Coast is likely to see floods, mudslides and perilous surf even if it misses the very heart of the hurricane.

The weakened remnants may even bring rains later next week to the U.S. Southwest, the Great Basin and Central Rockies, forecasters said.

The U.S. National Hurricane Center forecast track showed Nora skirting close to the bay sheltering Puerto Vallarta by Sunday morning and then shooting straight up the narrow Gulf of California a day later, passing very close to the Los Cabos resorts. Also near that track is the resort of Mazatlan.

Nora was expected to start weakening as it blows further north toward the Arizona border region.

It was centered about 230 miles (370 kilometers) south of Cabo Corrientes, the point jutting into the Pacific south of Puerto Vallarta, and it was heading to the north-northwest at 10 mph (17 kph).

The Hurricane Center said the Mexican states of Guerrero, Michoacan, Colima and Jalisco could see rainfall totals 8 to 12 inches (20 to 30 centimeters) with isolated maximums still higher. Baja California Sur state could see 4 to 8 inches of rain, with more in isolated spots.