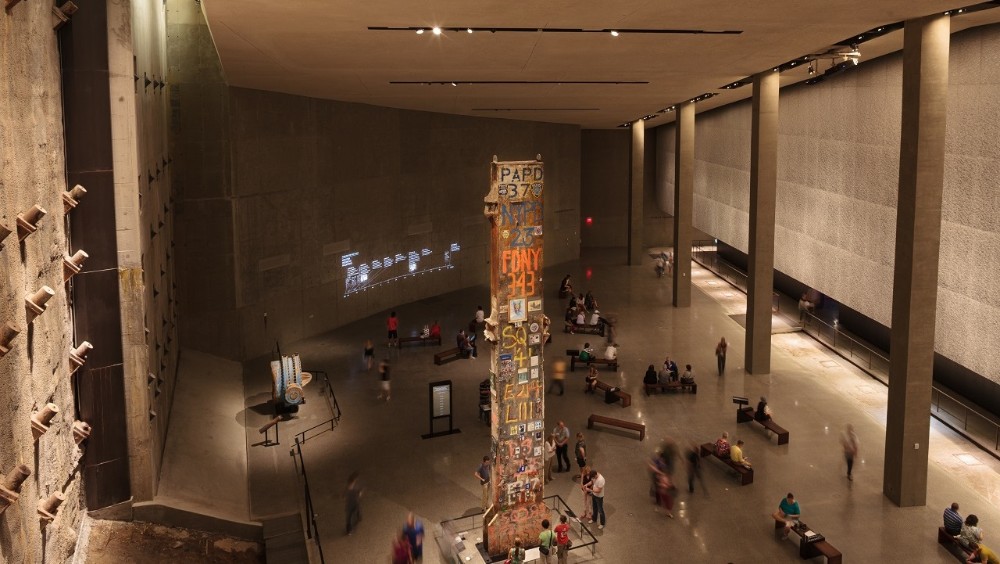 The 9/11 Memorial Museum invites visitors to learn about the history of the 9/11 attacks and the 1993 World Trade Center bombing at the site where the Twin Towers once stood. The Museum’s dynamic blend of architecture, archaeology, and history creates an unforgettable encounter with the story of the attacks, the aftermath, and the people who experienced these events.

The 9/11 Memorial Museum was dedicated on May 15, 2014, in a ceremony led by U.S. President Barack Obama and 9/11 Memorial Chairman Michael R. Bloomberg. It opened to the public on May 21, 2014. Since then, people from all 50 states and more than 175 countries have visited the Museum.

Visitors enter the Museum through an aboveground entry Pavilion on the Memorial. Designed by architectural firm Snøhetta, the Pavilion serves as a bridge between the memory of past events and the promise of renewal through reconstruction. Belowground, architects Davis Brody Bond designed Museum spaces that recognize the power of place and highlight the authentic archaeological remnants of the World Trade Center.

The Museum’s ramped descent offers views into the vast cavity of the original World Trade Center complex. After 9/11, preservationists, survivors, and other advocates fought to ensure that the World Trade Center site and its archaeological remnants were saved. Typically, properties are not considered for the National Register of Historic Places until 50 years after they achieve historical significance. 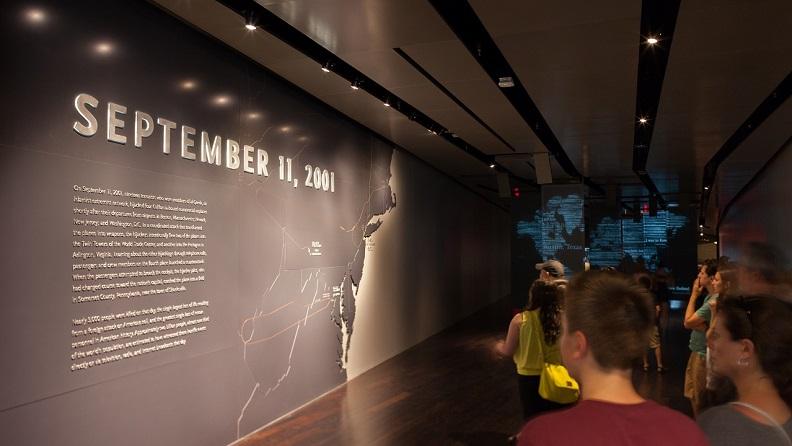 The World Trade Center site, however, became eligible in February 2004 after it was deemed to be “exceptionally significant in the history of the United States as the location of events that immediately and profoundly influenced the lives of millions of American citizens.”

One of these historic remnants, known as the Survivors’ Stairs, lies at the end of the ramp. On 9/11, this staircase at the edge of the elevated World Trade Center Plaza provided an unobstructed exit for people fleeing the site. After 9/11, the stairs were slated for demolition but were saved during the federal review process of the site’s historic assets. As visitors arrive at the main exhibition and education level, they follow the stairs that led hundreds of survivors to safety on September 11, 2001.

Visitors descend to the main exhibition and education level via a ramp that evokes a history of construction ramps at the World Trade Center site: one to build the original complex in the 1960s and another installed during the post-9/11 recovery period to remove wreckage from the site and grant victims’ family members access to Ground Zero.

At bedrock, visitors encounter two monumental spaces: Memorial Hall and Foundation Hall. In Memorial Hall, located between the footprints of the original Twin Towers, two site-specific artworks are on view. A quotation forged from recovered World Trade Center steel by artist and blacksmith Tom Joyce—“No day shall erase you from the memory of time”—speaks to the Museum’s promise to remember the 2,983 lives lost on 9/11 and in the 1993 World Trade Center bombing. Surrounding the letters of the Virgil quote is a work by artist Spencer Finch titled Trying to Remember the Color of the Sky on That September Morning. Composed of 2,983 individual paper panels, Finch’s installation is a panoramic mosaic of color that attests to the magnitude of the disaster and its incalculable cost in human lives. 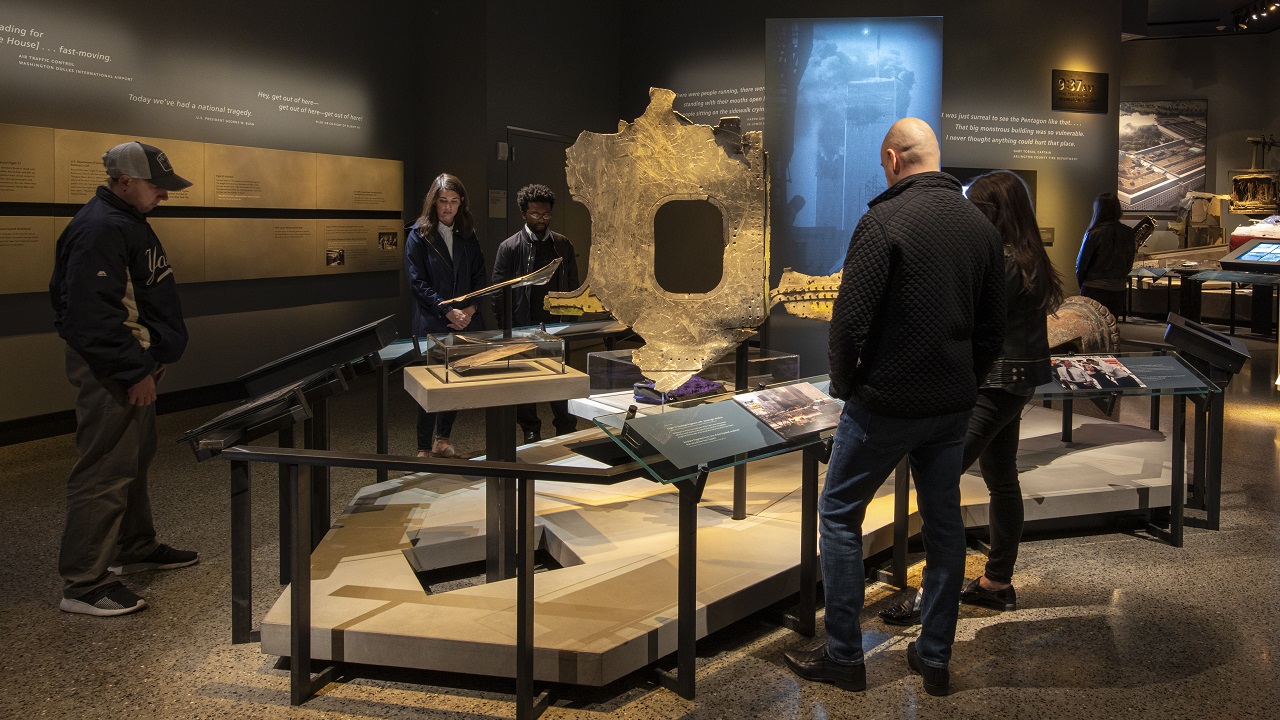 The largest space in the Museum is Foundation Hall, situated beside the North Tower footprint. The backdrop for Foundation Hall is a monumental portion of the slurry wall, a concrete retaining wall built to hold back the waters of the nearby Hudson River when the World Trade Center site was first excavated in the mid-1960s. Following the collapse of the towers on 9/11, the slurry wall remained intact—a potent symbol of strength and resilience.

At the center of Foundation Hall stands the Last Column, the final piece of World Trade Center steel to be removed from Ground Zero. As rescue and recovery workers cleared the site after 9/11, they covered the 36-foot steel column from top to bottom with inscriptions, mementos, and signatures. The Last Column was removed from the World Trade Center site on May 30, 2002, in a ceremony marking the official end of the recovery period.

Exhibition spaces, conceived by lead designers Thinc Design in collaboration with Local Projects, provide visitors with an indelible encounter with the story of the attacks situated within the authentic site of the World Trade Center. The Museum’s core exhibitions are located inside the footprints of the North and South Towers. In Memoriam, the Museum’s memorial exhibition in the South Tower footprint, commemorates the victims of the attacks of September 11, 2001 and February 26, 1993. 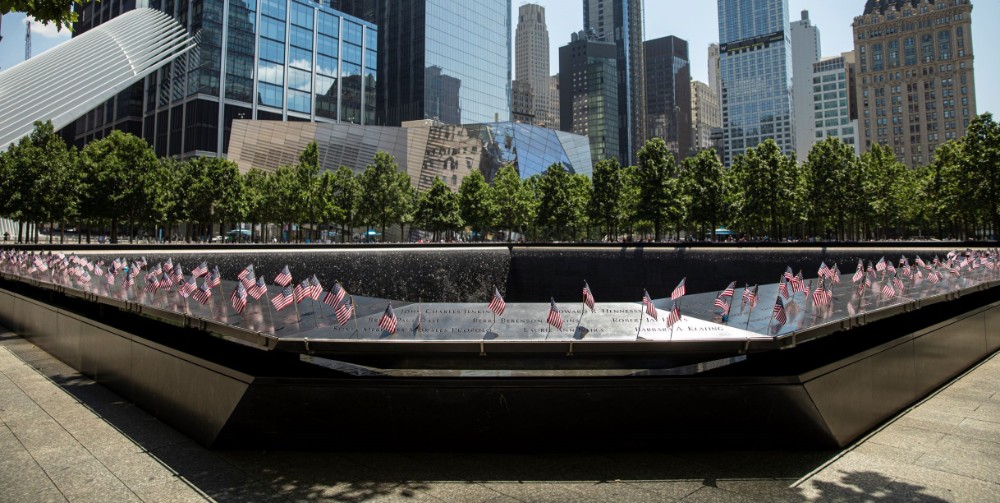 The Museum also has two galleries for rotating, temporary exhibitions. The South Tower Gallery in the South Tower footprint is dedicated to exhibitions of photography and artwork. The Special Exhibitions Gallery, in the North Tower footprint, explores topics of contemporary significance that speak to the ongoing ramifications of 9/11. This gallery is temporarily closed in adherence with federal, state, and city guidelines in response to the COVID-19 health crisis.