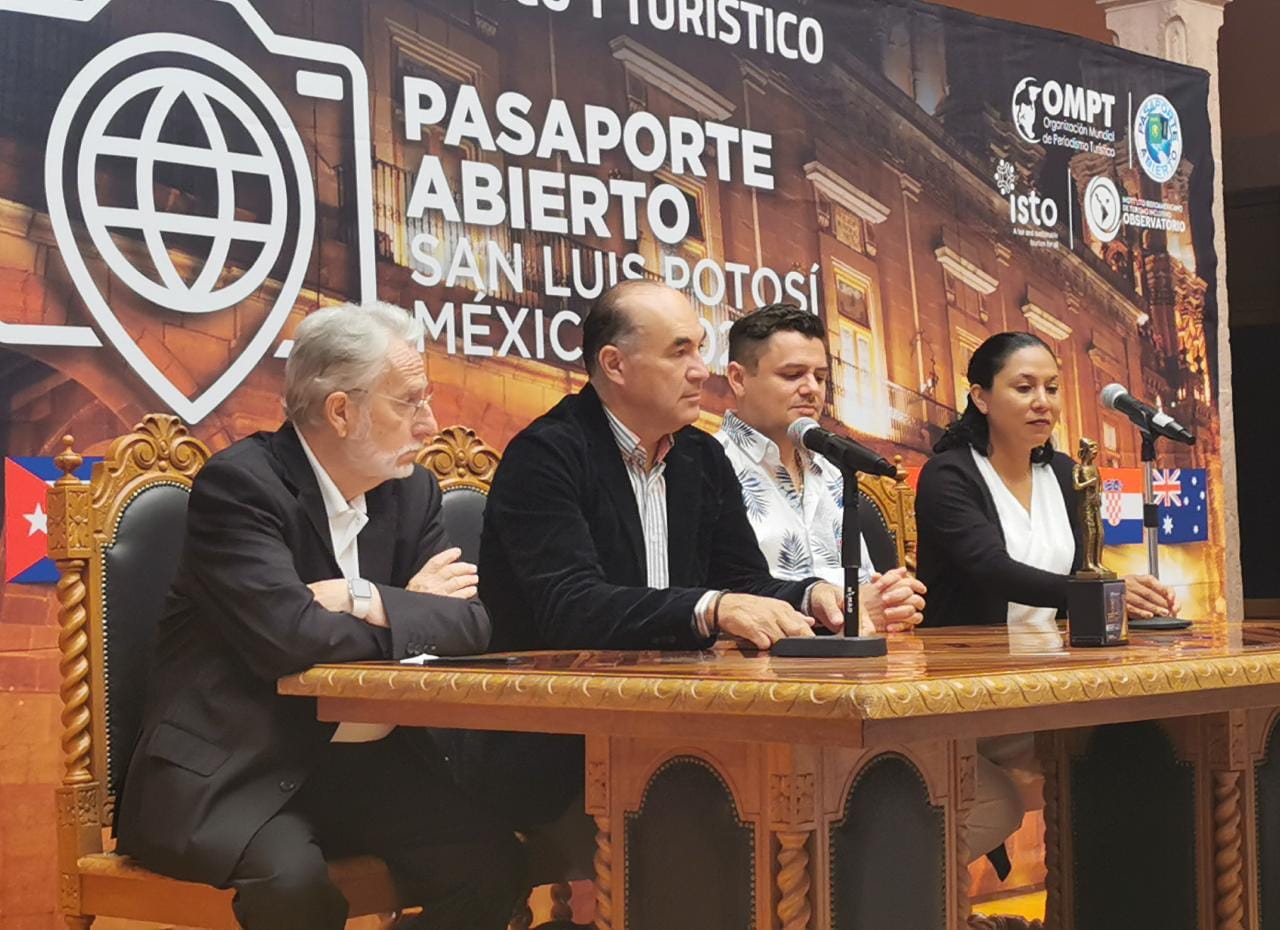 The best of the world's tourism journalism gathered these days in San Luis Potosi, Mexico, to attend the "Pasaporte Abierto" awards ceremony, an event presided by Mayor Enrique Francisco Galindo Ceballos and his wife Estela Arriaga.

At a press conference held today following the presentation of the "Pasaporte Abierto" awards, several topics of interest about the awards and the city's tourism development were discussed.

Mr. Galindo Ceballos recognized the importance of tourism journalists being organized, since they collaborate to achieve a world without borders, with free access to information, but also willing to promote tourism journalism to raise awareness.

"The circumstances of some countries like mine led us to specialize many journalists as police officers and today I prefer tourism journalists, who talk about my city and the world, who say what we have and can have, and the potential it means to have someone who writes based on in-depth research and who discovers the cities, the corners of the cities, the gastronomy," said Mr. Galindo Ceballos.

For his part, Joan Passolas, tourism advisor to the San Luis de Potosí Capital City Council, spoke of the importance of Mesoamerican civilizations and their role in today's culture, and in this, he said, lies the importance of defending them through tourism.

"A word is much more than a sound, it is something that describes a way of life, it describes a universe, every two seconds a word dies that no one else will pronounce. That is what we cannot allow, that no journalist or anyone who talks about tourism, we cannot allow. In Latin America we have to fight so that the children of our children's children have the same cultures that we received when we were born. Mesoamerican cultures are too important to be lost", explained Mr. Passolas in his speech during the press conference.

The international "Pasaporte Abierto" awards have been held in recent years in several countries, such as Panama, but this time they were held for the first time in the capital of San Luis Potosi, Mexico.

Pasaporte Abierto is a recognition to tourism journalists who carry out their work in an ethical manner and to the organizations that collaborate with the committed work of these tourism communication professionals. The award seeks to represent the need to live in a world without borders in which respect, solidarity and free access to information prevail.

The Gastronomic Approach that Should Prevail

The president of the Excelencias Group, Jose Carlos de Santiago, asked those present about the plans San Luis Potosi's authorities have to grant gastronomy its rightful role in the destination's tourism development.

"We did outline a strategy, the first one was, as a heritage city, which are 15 heritage cities in Mexico and we are one of them, the gastronomic guide of this city was developed, today it is online, you can consult it, we have our own alliance with local restaurants that promote local food, but also here being the capital we have representation of the huasteca food, which is very rich, in fact San Luis is known for its huasteca food, and we have the traditional dishes", expressed the municipal mayor Enrique Galindo.

He also explained that the Association of Capital Cities also developed the gastronomic guide of capital cities, where San Luis Potosi has 14 to 16 restaurants listed.

"Potosí's gastronomy is very good. We are making a rediscovery of the gastronomy of the 19th century, that one that we forgot, but we have the original recipe books, from that time of the municipal palace," continued the Municipal Mayor.

"We are a city that has its own gastronomy, we are making it known in an important way and I believe that these two mechanisms, the gastronomic guides, are the ones that have given the best results", concluded Mr. Galindo.