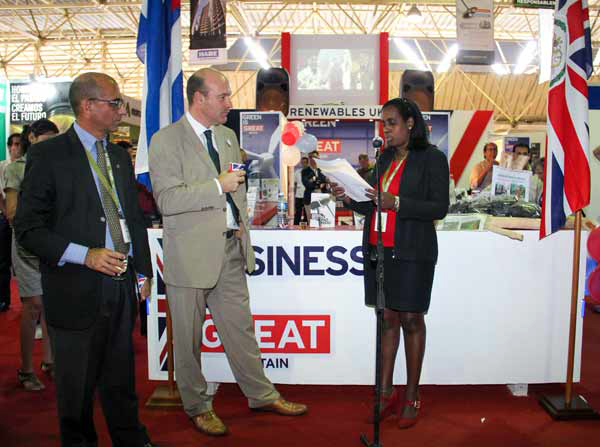 On November 4, 2014, right at teatime, Expocuba’s Pavilion 10 hosted the celebration of the United Kingdom’s Day within the framework of FIHAV 2014. British Ambassador to Cuba, Tim Cole, welcomed the attendees and highlighted the presence of the Cuban deputy minister of Foreign Trade and Investment, Ileana Núñez. The ambassador pointed out that both Cuba and the United Kingdom want to be green countries; both nations are committed to developing and tapping into renewable energy sources.

“The challenge is turning this commitment into facts and that’s something we can do together. My government has played an outstanding role when it comes to fostering low carbon energy as the solution to the climate change and a guide of future economic growth in my country. With an annual volume of operations of $50 billion, the United Kingdom’s energy sector employs 230,000 people and the annual exports to the Caribbean surpass $6 billion.”

The diplomat said that there are hundreds of dynamic and innovating British companies that are developing new technologies to exploit renewable energy and they are presently participating in the fair. The HSPC group is an example, with headquarters that feature 617 square meters of solar photovoltaic facilities. It’s the largest of its kind in Europe.

“Over half of the total offshore wind-driven power generation capacity worldwide is currently installed in the United Kingdom’s waters and the country stands as the world leader when it comes to producing small wind turbines. As you all know, British and Cuban companies have created a joint venture to build five generating plants.”

“New challenges require new technology and only research brings about new technology”, he commented and underlined that United Kingdom’s world-class universities and institutes are working on such matters as energy and power generation by means of all disciplines of science, engineering and business.

“The United Kingdom is a greener country, and we want to help Cuba be even greener.”
The British ambassador noted that the Cuban government’s wish of attracting foreign investment has triggered growing interest of British companies toward this country.

“Cuba is not the only country looking for investments. It’s competing with the rest of the region and the rest of the world. That’s the reason why they should work to have an excellent and competitive business environment. Both Cuba and the United Kingdom need to do more.

“There is a lot that my country, which has overcome the economic crisis and is presently growing, can offer to Cuba not only in terms of renewable energy, but tourism, agriculture, biotechnology and many other fields.”

The British ambassador’s final words were: “My message is simple: you are open to foreign investment, we have foreign investors; you are interested in developing renewable energy, we can help you with that; you want to be green, we want it too. We must come together to be greener.”