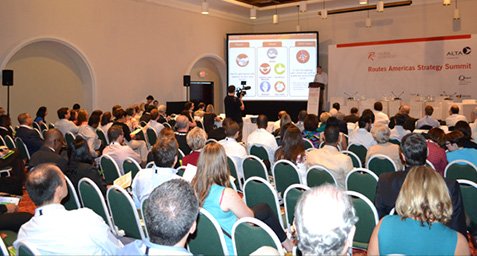 The 7th Routes Americas will open in San Salvador on 23rd February with the ALTA Routes Americas Strategy Summit. The event will be held in association with the Latin America & Caribbean Air Transport Association (ALTA) and sponsored by The New Quito International Airport.

Routes Americas is the largest commercial aviation event of its kind for the entire Americas region. It is the meeting place for over 400 delegates representing over 70 airlines, 200 airports and almost 50 countries, including 100 senior executives of airlines, airports, associations as well as tourism ministers.

The event attracts the highest level of senior decision makers and, following an announcement last December, the event now also incorporates Network USA, creating a single definitive event platform for all those interested in meeting with the industry's key players to discuss air service development to, from and within the entire Americas region.

The Strategy Summit, which will be held during the opening day of Routes Americas, brings together leading industry experts to debate aviation and route development issues across the Americas region. Attendees will hear opening remarks from Jose Napoleon Duarte Duran, Minister of Tourism of El Salvador followed by a keynote address from Eduardo Iglesias, Executive Director of ALTA, and four sessions covering highly topical subjects affecting aviation in the Americas region.

"El Salvador is ready for the aviation industry, airports and tourism under Routes Americas 2014, an event that sets industry trends and fosters the development of new services to, from and within the Americas," said Minister Jose Napoleon Duarte Duran, continuing: "Hosting Routes Americas means significant exposure for El Salvador in hosting business events, but above all, to show that tourism offered by our country and its excellent air connectivity showcase."

Eduardo Iglesias commented: "We are delighted to join Routes in the execution of Routes Americas. The topics addressed in this setting are key to the alignment of partners in Latin American and Caribbean aviation, especially with airports, key players in the industry. Only together and understanding the synergies available to us as partners, can we bring about the change necessary to realize the economic potential of aeronautics in the regional landscape."

"Our partnership with ALTA is very important to us and we are thrilled with the caliber of speakers this event has on the program," said Adrian Newton, Group Director, Transport and Technology, UBM Live continuing: "Looking ahead, the Americas region will be a particular focus for Routes over the coming 14 months following the transfer of Network USA to Routes control and with Routes Americas 2014 in San Salvador, World Routes 2014 in Chicago in September followed by Routes Americas in Denver in February 2015 - the first time that this regional event will take place in the US, the largest aviation market in the world."

The program will also include presentations from Andrew O'Brian, President and CEO of Summit sponsor The New Quito International Airport and a presentation on the Caribbean market by Beverly Nicholson-Doty, Chairperson of the Caribbean Tourism Organization and US Virgin Islands Commissioner of Tourism.

Routes Americas, ALTA Team Up for High-Level Strategy Summit
August Wrap-Up Issue
Tourist Excellencies Awards to the Management of Latin American and Caribbean Tourism Offices in Spain and Europe
Spain´s Excelencias Group Sets Up Caribbean HQs in the Dominican Republic
One Caribbean
The Caribbean and Europe
Vincent Vanderpool: A Man of His Word
Aruba Deserves More Respect in the Holloway Case