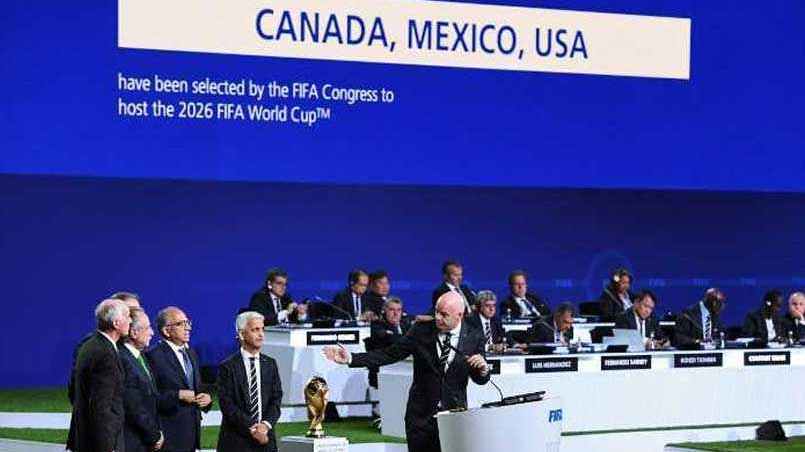 The United States, Canada, and Mexico will host the 2026 World Cup after capturing 134 of 200 national soccer federation votes at FIFA's annual Congress in Russia Wednesday.

The "United Bid" beat out Morocco's proposal, having been favored in the association's recent evaluation report given the infrastructure already in place.

Landing the 2026 tournament is a huge achievement for North America and the U.S., in particular, which last hosted the World Cup in 1994. It also marks the first time in FIFA history that a three-nation bid has been awarded hosting privileges.

The bid's plan calls for 60 of the tournament's 80 games to be played in the U.S., with Canada and Mexico hosting 10 apiece. The final is expected to be held at the 83,000-seat MetLife Stadium outside of New York. However, FIFA will determine which cities are ultimately selected as hosts.

Early last year, it appeared as if President Donald Trump's controversial travel ban might derail the region's bid to host the World Cup. However, a recent New York Times report detailed three letters Trump addressed to FIFA president Gianni Infantino, assuring him and other soccer officials that no teams, officials or fans would be restricted from entering the U.S. to attend the tournament.

"I am confident that the United States would host the 2026 FIFA World Cup in a similarly open and festive manner, and that all eligible athletes, officials, and fans from all countries around the world would be able to enter the United States without discrimination," Trump wrote in a May 2 letter referring to the 1994 World Cup and 1996 and 2002 Olympic Games.

On Tuesday, the U.S. Travel Association responded to the Times report, applauding Trump's efforts to help bring the World Cup back to the U.S.

"Major events are a magnet for tourism and job creation, which is why competition to host them is so hotly contested. We applaud the president for embracing visa policies that support tourism and business objectives, which hold clear value for U.S. job creation and our trade balance—not to mention our standing on the world stage," said U.S. Travel Executive Vice President Jonathan Grella in a statement. "The president's assistance with the U.S.'s 2026 World Cup bid is a signal that he is fully committed to spurring GDP and job growth."

U.S. Soccer President Carlos Cordeiro noted that visa requirements were among the biggest obstacles for the United Bid in a letter to top FIFA officials last month.

"In our bid’s discussions with football associations around the world, one topic has been visa and entrance requirements to the United States in 2026. I want to assure you that we take this matter very seriously and that the U.S. government has made strong commitments to FIFA," he wrote, via the Times.

According to ESPN, the United Bid predicted that hosting the 2026 World Cup would produce revenues of $14 billion given the U.S.'s already well-established economy and corporate structure. The 2026 World Cup will also be the first to feature an expanded field of 48 teams, meaning the event will draw 16 additional national teams and their fans.