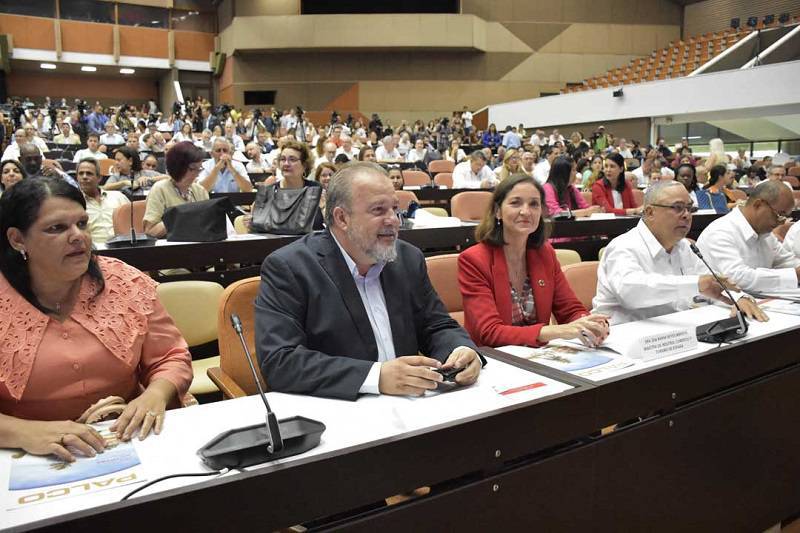 The 39th Edition of the International Tourism Fair (FITCuba 2019) officially opened Tuesday at the International Conference Center of Havana, with the presence of hundreds of delegates from different countries.

The opening ceremony of the main commodities exchange of Cuba, which takes place from today in San Carlos de la Cabaña Fortress and which will conclude on May 11th, was attended by the Minister of Tourism of Cuba, Manuel Marrero Cruz, and María Reyes Maroto, owner of the Spanish branch, which this year is a guest country of honor

The first Secretary of the Cuban Communist Party in Havana, Luís Antonio Rodríguez Iribar, and the President of the Government of the Cuban Capital, Reynaldo Zapata, were also in attendance.

The President of the provincial government, Reynaldo Zapata, said in the initial speech that "Havana is a universe full of cultural beauties and very safe as a travel destination, a city keen on serving tourism."

On her part, the Spanish Minister of Tourism, María Reyes Maroto, thanked the invitation to Spain as a guest country of honor at a time when Havana celebrates the 500th Anniversary of its founding

"Tourism is one of the development levers of 21st Century. For Cuba and Spain, it is the first source of economic income. It grows above the global economy as a whole and it has a quite positive outlook for future growth. Both, Spain and Cuba have to take advantage of this perspective to put it according to their development" said Minister Maroto, who underlined the firm and unconditional commitment of Spanish entrepreneurship with Cuba.

Raising the quality of tourism by accelerating digital integration in the sector, making changes in governance, preserving culture and sustainability, as well as adapting to constant changes faced by the industry are some of the Recommendations that Minister Maroto offered to Cuban tourism, based on the Spanish experience as one of the leading nations in that field.

He also announced that it will carry out the second program of reconversion of Cuba's debt with Spain, ascending to 375 million euros, and that it will encourage a greater flow of investment to the island.

He also recalled that Spain had led the European Union's rejection of the implementation of Chapter III of the Helms-Burton Act. "Spain is not only here today to defend the interests of Spanish companies, but also to lend a hand to Cuba at this time," said the high Spanish official in the middle of the attendees´ applause.

On his part, the Minister of Tourism of Cuba, Manuel Marrero Cruz, in his closing speech of the opening ceremony, thanked the attendance to this 39th Edition of FITCuba of the president of COCAl, Pablo Weil; and the Minister of Tourism of Venezuela and Nicaragua, Stella Lugo and Anasha Campbell, respectively; of the Secretary General of the Association of Caribbean States, June Omera; of the Tour Transat and Sunwing Presidents, and the president of Iberia.

He added that a total of 198 journalists from 34 countries attended to this event, and predicted that for next year, on the occasion of the 40th Edition of FITCuba, the Ministry of Tourism and the whole country are preparing to celebrate the largest and most spectacular Tourism Fair in Cuba.

Before concluding, he thanked once again the Spanish Minister of Industry, Commerce and Tourism, María Reyes Maroto, for "her presence, her support, her words and, above all, her bravery" at this fair.