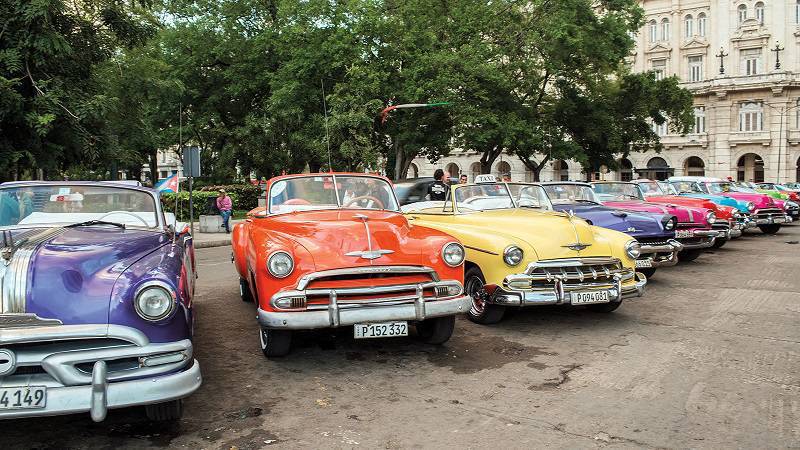 One of the most striking things any visitor arriving in Cuba for the first time notices is the incredible amount of classic cars from the 1950s and 1940s –some of them are even older makes as far back as the 1930s and 1920s- that roam the streets of every city, especially the island nation’s capital, Havana.

Cuba as a Car Testing Ground

There was a time, before the 1959 Revolution that put Fidel Castro in power, when Cuba was America’s playground in many ways, including the testing ground of choice for automakers willing to try out new car models before putting them on sale in the U.S.

Shiploads of automobiles from all famous brands –Ford, General Motors, Chrysler, Oldsmobile, Chevrolet, Pontiac and others- used to arrive in Cuba on a regular basis. Ferry service between Havana and Miami was commonplace, so American tourists used to come here with their shiny new vehicles to drive around town, thus adding to the mix.

Then, when the U.S. sanctioned Cuba with a still-standing trade embargo, importation of new cars stopped. Car sales were banned on the island and Cubans were not allowed –that ban was lifted a couple of years ago- to buy cars or import vehicles from other countries. Dealers closed down and only a few Russian models were imported.

As a result of all this, classic made-in-the-USA cars built before the 1960s were the sole survivors in the streets. But as time rolled on, they started getting older and crankier. There were no spare parts for these vehicles that had even been discontinued a long time ago.

But the Cuban people did what they know best, something they have been forced to do every so often in the course of these five decades: improvise. Local turners began churning out parts for the old American cars, while others embarked on all-out innovation process of adapting a hodgepodge of spare parts from Russian-made vehicles to their vintage all-American cars.

The bottom line is that those old cars from the 50s and 40s are still out in the streets. Now Cuba is literally a rolling car museum. Everywhere you look around is an old-school American brand vehicle. And the owners are very proud of their rolling gems.

There are, of course, new vehicles barreling down the avenues and the central highway these days, most of them imported from Europe and South Korea. With the influx of tourists increasing with each passing year, tourism authorities decided to use many of those new cars as taxis.

However, the fare they charge is for tourists only. Most Cubans, whose average wage is barely $20 a month, can’t afford to take a ride in a genuine yellow cab. So, they turn to gypsy taxis, a large fleet of classic cars that charge only $0.30 for a long ride across Havana and $0.80 if you’re going to the outskirts of town.

So, here they come again. The old American cars built before the 1960s keep rolling and rolling. And now with the thaw in relations between the U.S. and Cuba, following President Barack Obama’s historic announcement to reestablish diplomatic ties with the island nation on Dec. 17, 2014, more Americans are visiting Cuba than ever before.

Vintage cars more popular than ever

Even though a nagging travel ban remains very much in place and tourism in Cuba is still off-limits for U.S. citizens, they are coming anyway, sheltered in any of the dozen categories that allow people-to-people travel to Cuba. And they are indeed coming in droves, up 75 percent in 2015 from the previous year.

And guess what? The first thing they do when they touch down in Havana or elsewhere across the country is ask for a vintage topless car for a grand tour around town.

This demand for classic American cars is so much on the rise right now that Cuba’s state-run company Grand Car, tasked with providing tourists with those old vehicles, is running out of stock. A new private company set up shop a year ago and is doing great, giving American tourists the chance to ride shiny Buicks, Cadillacs and Chevys with a guide-chauffer.

So, the old cars many countries threw away and discarded a long time ago are the ride of choice in Cuba. The original gas-guzzling engines have been replaced by more economical diesel motors. Only a few lights still go on across the dashboards, a reason why many of those indicators have been replaced with LED lights. Innovation has prevailed, and so has the spirit of the Cuban people amid so many hardships.