Sharp as the 9:00pm Cannon Shot 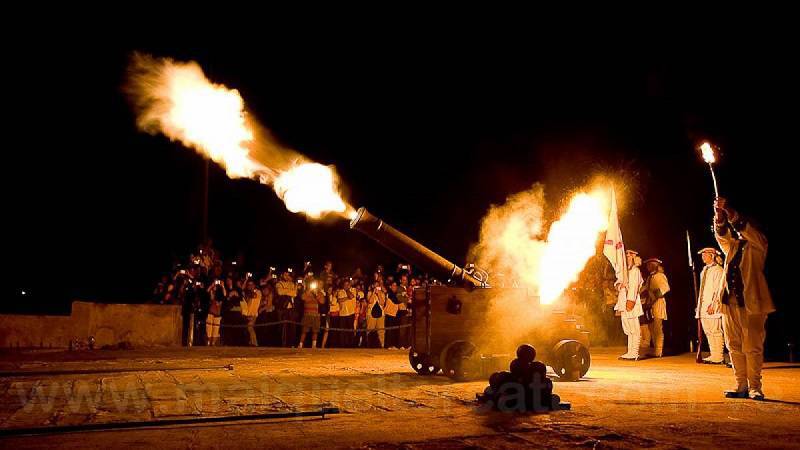 When an elderly resident of Havana shows off good health and vitality despite his or her age, he or she is usually referred to as a man or a woman who is “as sharp as the 9 o’clock cannon shot.” The same expression applies when someone is always on time for a date or an appointment.

The fact of the matter is that this peculiarly local expression stems from an actual cannon shot that’s fired every night from the fortress of San Carlos de La Cabaña in Havana, a tradition that harks back to the 18th century.

In addition to being a popular set phrase, the cannon shot is good for people in the island nation’s capital to set their timepieces.

The ceremony is indeed an incredible opportunity to travel back in time as it’s currently executed by young officers and soldiers dressed in uniforms from the times of the Spanish colonial rule. Scores of locals and tourists gather every night to witness the firing of the cannon shot at 9 o’clock sharp.

During the Spanish colonial rule, the cannon shot was the warning of choice to announce that the city walls were being either opened or closed. At that time there were two different cannon shots. There were also two cities: one trapped inside huge limestone walls and another one outside those barriers. Today, only a few dregs of those walls –they were built alongside the fortresses to protect the city from the attacks of corsairs and pirates- remain standing.

At 4:30 am every morning, a cannon shot used to announce that the big chains lined across the bay and all drawbridges were going to be lifted, thus allowing the traffic of both ships and people on both sides of the walls. A second firing at 8:00 pm used to trumpet the shutdown of the city. Neither vessels nor people could from that moment on enter or leave the city.

Later on, the firing of the cannon shot was pushed back to 9:00 pm and the tradition remained unaltered even after the walls disappeared. The only reason then was to let dwellers know what time it was.

On the onset, the shots were fired from a gunship docked in the harbor. Through the years, the ceremony was moved to the fortress of San Carlos de La Cabaña, where it continues today.

Between June 24, 1942 and December 1, 1945, the 9 o’clock cannon shot ceremony was called off. Cuban had entered World War II and the Army’s Chief of Staff banned any firing at night in a bid to save gunpowder and avoid giving away the military’s position to the enemy. Once the war was over and thanks to continuous requests made by the population, the ceremony resumed.

After Havana was seized by the British troops in 1762, Spanish authorities ordered the construction of the fortress of San Carlos de la Cabaña, home to the traditional 9 o’clock cannon shot ceremony. The building works began on November 4, 1763 and ended in 1774, and the fortification became the largest fortress ever built by the Spanish rulers in the Americas.

Built within the principles of the French military designs, the fortress features a number of buttresses and strongholds, several loopholes, a deep moat, thick walls, cobblestone pathways and huge facilities reserved for garrisons and warehouses.

Walking past the majestic entrance of the fortress is like stepping into a military city full of streets and squares, walls and stones, where the past and the present go hand in hand.

In addition to watching the traditional cannon shot ceremony at 9:00 pm every night, visitors can feast eyes on several museums that were fully refurbished in 1992: The Museum of Arms, The Che Guevara Commandership Museum and a small facility that tells the story of the fortress.

There’s no better place to take a rest than the Patio de los Jagueyes, a good spot to walk on to the beautiful San Carlos Chapel. Don’t miss out on the opportunity to sit on the walls and revel in a breathtaking view of the city and its bay.

Visitors can also wait for one of the many events that take place there every year, such as the International Book Fair in February. The 2017 Havana Biennial of Fine Art is scheduled to unfold right on the premises.