The Hamel’s Alley in Havana 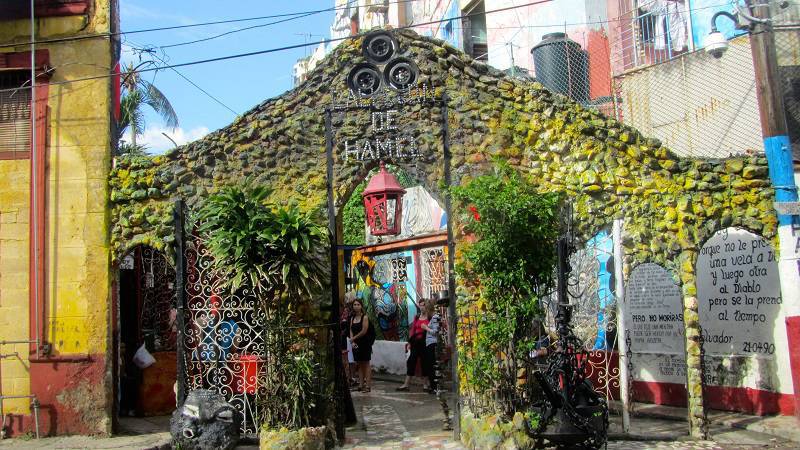 El Callejón de Hamel (The Hamel’s Alley) is located in the bustling Havana neighborhood of Cayo Hueso, in the municipality of Centro Habana, not far from such major landmarks as the University of Havana and the former Havana Hilton Hotel, both in the El Vedado area.

Salvador Gonzalez is 50-plus years old. He is a man of faith who lives there and is profoundly committed to keeping the culture of his ancestors alive and kicking. He surprisingly began sweeping people off their feet with his mural activity at the Hamel’s Alley in 1990, with bold inroads as a self-taught painter, and he got a smash hit.

Eight countries in the Americas, the Caribbean and Europe have been scenarios for the creation or the presentation of his artworks. These exhibitions show his creative art in murals, always with the commitment to spreading out the Cuban culture and standing up for his African roots.

Hamel’s Alley is the sanctuary for his most excellent work: a vast mural that covers the surface of buildings nestled in the heart of this cul-de-sac, a move that gave him prominence in the artistic world.

Salvador talks candidly about his motivations and the driving force behind his work, the reasons for turning this place into his personal pantheon. His work is a mixture that sways between surrealism and abstraction, always from the purest essence of the African culture. It’s all about putting across a message with well-defined criteria on movement and abstraction, always present in all muralist works.

His mythical aspirations as a muralist began out of the desire of get this job done and of the intention to take the walls by storm. He insists that his work was not a preconceived project, but rather the anxious desire of putting himself to the test before the critical eye of people –one of the toughest challenges any creator must cope with.

And make no mistakes about it; the coherence of his artistic expression indicates that all execution begins with well-organized ideas, enriched with new initiatives. As to the theme the fine artist expresses in his work and his discourse, it’s more about his inclination and devotion to the culture of his African ancestors and the personal commitment to making it last forever.

What’s more, the artist underscores that broaching these religious and ancestral topics in his works pursues the objective of highlighting the African culture by showing due respects to all those olden values. Salvador presents himself as a man of faith who wants to perpetuate the values passed on to him by his ancestors.

He describes the respect that he tributes to elderly people, because they sum up the cultural wealth as a whole, something which is far more important than himself; something that goes beyond his own work because it belongs to the cultural identity. In each line, traced with fine imagination, this artist’s murals convey a powerful message no one can pass up.

“My work responds to codes of very easy comprehension and its message is reflected in the variety of themes, traces and colors, always developed from the most authentic African values,” Salvador says.

He explains that La Nganga is more than a sample of religiosity. It is converted in a truly token for worshippers and a chance to pique the curiosity of those who are not.

In this respect, he says La Nganga has some magic of its own. It all began as a simple sculpture that eventually reached out to the rest of the alley and transformed it into some kind of neighborhood shrine. Now the place is visited by both local dwellers and foreigners eager to take a closer look at this monumental work of street art.

Salvador says that, according to the legends, the Ngangas –both small and huge pots- are the centerpiece of the Palo Monte or Palo Mayombe rituals, let alone that they have a charge of special spiritual energy ingrained in them. The Ngangas were bestowed with the powers of witchery as a hefty African symbol.

The artworks in display in the Hamel’s Alley are social offerings to the community, a participative work every step of the way. Every Sunday, dancing groups and musicians, including famous percussionists, singers, actors, poets, performers and writers offer their art in a place where every kind of art is possible.

But it is not the fleeting art of the community; it is perpetual, permanent art inside a population that receives those ethical values, that documentation and information which people need. Hamel’s Alley is an open door for everyone to see what street art is actually all about.