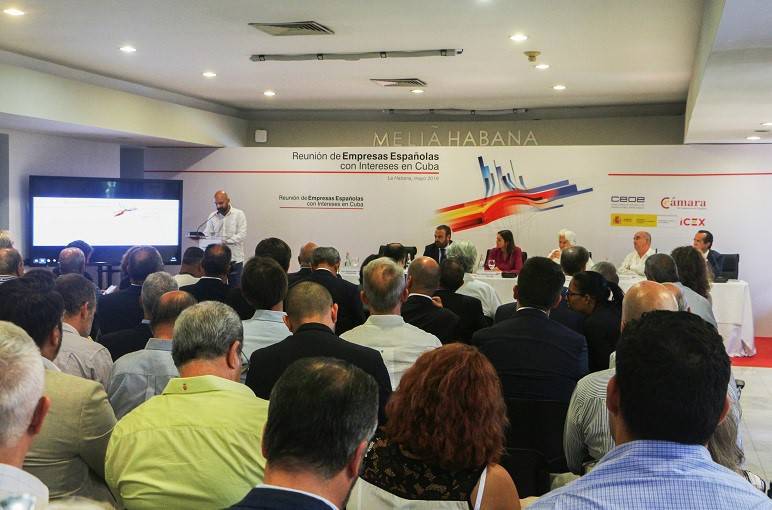 At the threshold of the grand opening of the 39th edition of the International Tourism Fair (FITCuba 2019), the “Telde” Lounge at the Meliá Habana Hotel was the venue of choice Monday for the Meeting of Spanish Companies with Interests in Cuba, an event organized and sponsored by the Chamber of Commerce of Spain, the Spanish Confederation of Business Organizations (CEOE), the Spanish Ministry of Industry, Trade and Tourism, and ICEX Spain Export and Investment.

The meeting was chaired by María Reyes Maroto, Spanish Minister of Industry, Trade and Tourism, who attends FITCuba 2019 these days as Spain is the guest country of honor to this edition of Cuba’s main travel tourism tradeshow.

The CEOE International President Marta Blanco; Inmaculada Riera, general director of the Chamber of Commerce of Spain, and María Peña Mateos, CEO of ICEX, as well as the Spanish ambassador to Cuba, were in attendance.

As one of the top outbound markets for Cuba’s tourism and the main investor in that sector of the Cuban economy, the event was attended by top executives from the main Spanish hotel chains present in Cuba, such as Gabriel Escarrer, president delegate of Meliá Hotels International; Miguel Fluxá, president of Iberostar Hotels & Resorts, and Simón Barceló Tous, co-president of the Barceló Group.

The opening remarks were given by Inmaculada Riera, general director of the Chamber of Commerce of Spain, who focused her speech on highlighting Spain's firm commitment to Cuba as a commercial partner, a factor that "does not know about conditions or conjunctures". She also highlighted the commitment of Spanish companies to Cuba and their great contribution to the development of the island nation.

She also spoke of the uncertainty and growing concerns the full implementation of Chapter III of the Helms-Burton Act by the Trump administration has generated in corporate Spain, a move that could allow U.S. citizens and companies to sue those that are reportedly doing business with properties that were expropriated in Cuba after 1959.

For her part, Marta Blanco, president of CEOE International, underscored the need to increase loyalty in the Cuban tourism sector, something that contradictorily does not enjoy very high levels despite being the island a destination full of attractions. She thanked the Spanish authorities for the rapid response in support of the Spanish companies and their interests in Cuba, as well as the broad mobilization of Spanish corporations against the extraterritorial nature of the Helms-Burton Act.

Spanish business entities continue to join forces, with the rest of the Spanish authorities, to do everything within their power to participate in the development of the productive layout of the Caribbean island, even with a backlog of payments to be made by the Cuban parties and the uncertainty that the reinforcement of the United States embargo against Cuba now sparks off.

When closing the meeting, Minister María Reyes Maroto highlighted that Latin America is a top priority for Spain's foreign policy. She stressed that the commitment to Cuba remains unchanged and, in fact, will be reinforced. She welcomed the fulfillment of several of the bilateral commitments that were agreed upon in November.

“High-level contacts between the parties have been maintained. A total of 16 projects have been signed to replace imports in Cuba. A 375-million-euro program was agreed to continue promoting Spanish investments on the island, and tools and instruments between the two countries for the sake of transportation, tourism, infrastructure development and construction have been put in place,” said the minister of Industry, Trade and Tourism of Spain in his speech.

“We strongly reject this decision of the US administration that will only spin off a spiral of lawsuits and counterclaims that will harm transatlantic relations,” said Reyes Maroto, who concluded by saying that two call centers will be opened for Spanish companies in Cuba to request firsthand information on how to defend their interests both in Cuba and in the United States.